The Euro has surged over 2% against the US Dollar in December, pushing to its highest levels since April 2018. This impulsive topside push looks set to extend in the near term, despite the European Central Bank flagging further monetary policy easing at its upcoming meeting on December 10.

The central bank’s November meeting minutes stated that “members widely agreed that, given the sharper slowdown in growth momentum and the weakening of underlying inflation dynamics compared with what had previously been expected, it would be warranted to recalibrate the monetary policy instruments in December”.

The ECB is expected to expand its €1.35 trillion Pandemic Emergency Purchase Program (PEPP) and offer new long-term loans to banks through Targeted Longer-Term Refinancing Operations (TLTROs), with President Christine Lagarde stating that these “remain the main tools for adjusting our monetary policy”.

Yet, the International Monetary Fund has urged the ECB to consider options outside of expanding assets purchases given the notable stagnation in consumer price growth in the European Union. The trading bloc has recorded four straight months of deflation, with headline inflation flatlining at a record low of -0.3%.

Indeed, there appears to be an outside chance that the central bank may consider lowering interest rates further, after Governing Council member Klaas Knot said that “we wouldn’t want to exclude any measure going into December”, when questioned on the matter in a recent interview. Markets are currently pricing in a 25% chance of a rate cut at the upcoming meeting.

However, it appears these calls may go unanswered by the central bank in the near term at least, with Executive Board member Isabel Schnabel stating that “I think it’s appropriate to focus on preserving these conditions rather than easing much further”.

Schnabel added that “what’s clear is that since the beginning of the pandemic, PEPP and TLTROs have proven highly effective and are therefore likely to be the main instruments for recalibration”.

Therefore, the absence of more aggressive easing from the ECB may buoy the Euro in the short term and allow the currency to continue pressing higher against its major counterparts. 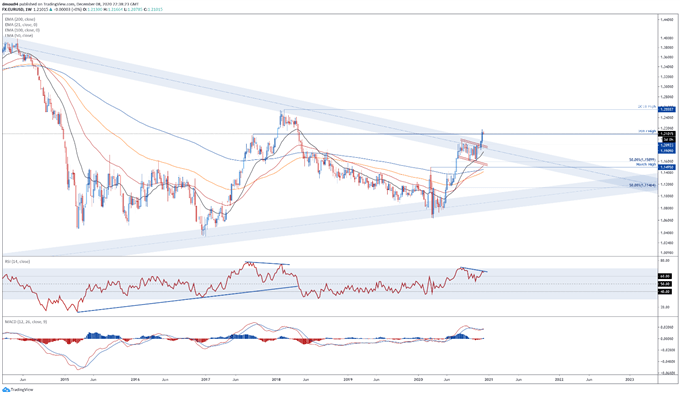 With prices tracking firmly above all four moving averages, the path of least resistance seems to favour the upside.

Remaining constructively perched above psychological support at 1.2100 would likely open the door for price to probe the 50% Fibonacci (1.2290), with a weekly close above 1.2300 bringing the 2018 high into play.

Alternatively, slipping back below the 2017 high could inspire a pullback towards the July high (1.1909). 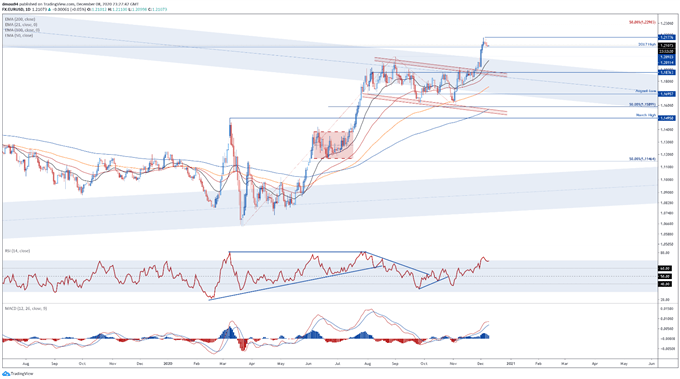 Zooming into a daily chart reinforces the bullish outlook depicted on the weekly timeframe, as prices continue to hold firmly above the 2017 high (1.2092) and psychological support at 1.2100.

A daily close above the December 6 high (1.2178) would probably neutralize near-term selling pressure and carve a path for price to test the 50% Fibonacci (1.2290).

Conversely, breaching psychological support could trigger a short-term correction towards the September high (1.2011), with a daily close below bringing the trend-defining 50-day moving average (1.1878) into focus. 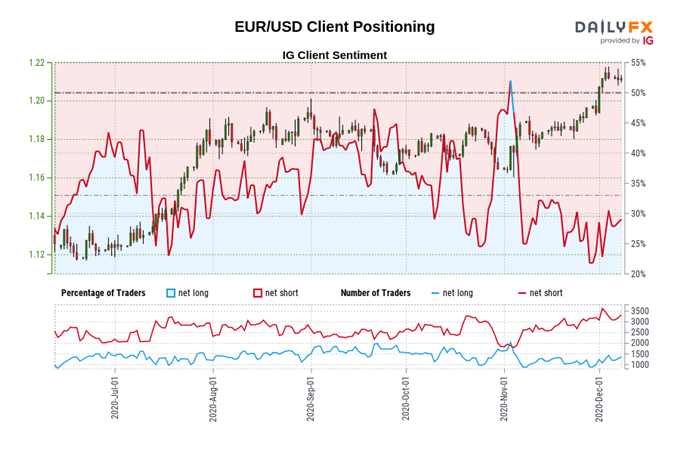