ECB Expected to Keep Rates on Hold in December Meeting

The ECB is set to meet on Thursday to assess the effectiveness of current monetary policy and whether the underlying economic conditions necessitate an increase in supportive measures - with one of those measures being a possible change to the interest rate.

According to a Bloomberg survey, no change in the main interest rate is anticipated, however, if the central bank decides that more support is needed, the existing pandemic emergency purchase program (PEPP) and the targeted longer-term refinancing operations (TLTRO) are most likely to be relied upon.

This comes after ECB President, Christine Lagarde’s statement on November 11 referring to the effectiveness of TLTRO and PEPP and that, “they are likely to remain the main tools for adjusting monetary policy.”

For more information, take a look at our full ECB rate announcement preview

Dax price action has slowed significantly after such a strong ‘v-shaped’ recovery off of the October low, bringing into focus the possibility of lower future prices. After failing to break above the September high of 13462, price action continued to consolidate, however, the initial signs of a short-term retracement are appearing on the chart.

Price action has broken below the rising wedge formation, ushering in a potential bearish view of the market, at least in the short-term. Additionally, the MACD line crossed below the signal line, indicating a potential reversal in momentum to the downside. Continued selling would highlight the 12,930 level of support followed by the 12,725 marker.

A failed move lower could see price action move sideways for some time while the possibility of a continuation of the upward trend cannot be written off. A break above the rising wedge and the recent high of 13,460 will be needed to renew hopes of further upside. 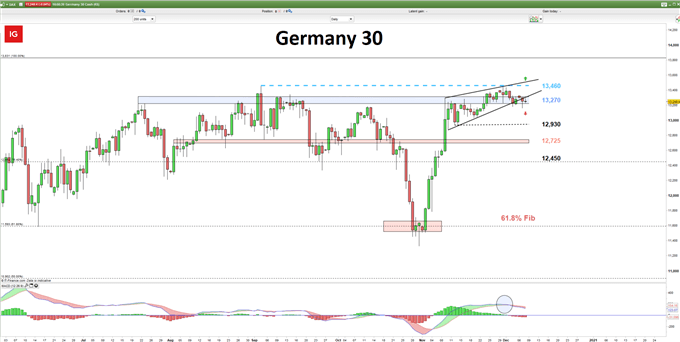 What Does the Rising Wedge Signal to the Market?

The rising wedge pattern is a powerful consolidation price pattern formed when price is bound between two rising trend lines. It is considered a bearish chart formation which can indicate both reversal and continuation patterns – depending on location and trend bias. 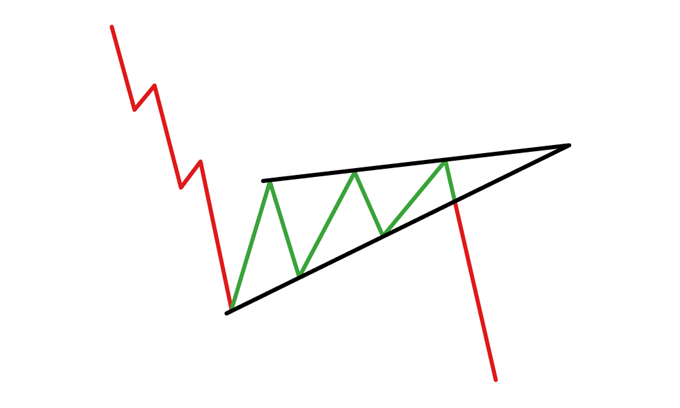 For an in-depth look at this unique pattern, read our dedicated article on the rising wedge 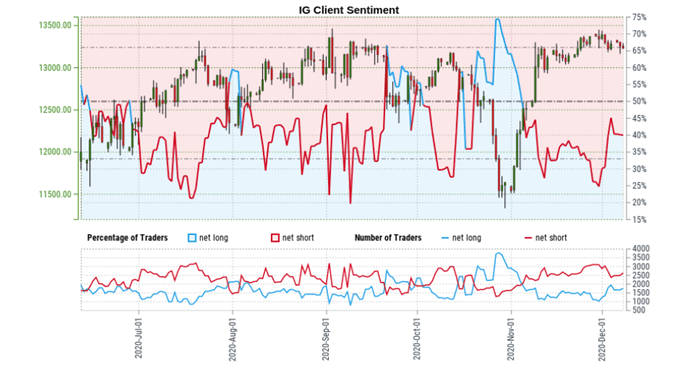