The announcement by President Cyril Ramaphosa to lockdown certain areas (termed ‘hotspot areas”) within South Africa has aided the short-term upward bias. The Rand is still in the green against the US Dollar for December which falls in line with historical price action during this period.

With current vaccine positivity, the Rand may experience further support via global risk-on sentiment which has been overwhelming influencing factor in the midst of COVID-19.

All eyes will be on the South African Q3 GDP data tomorrow (09:30GMT) which is estimated at 57.1% annualized (QoQ). This headlined figure may seem extreme but on the back of the dismal Q2 data - which projected the economy contracting by over 50% due to the global COVID-19 pandemic - this rebound was predictable. Many analysts foresee actual figures exceeding the listed 57.1% figure which could have a positive effect the local currency.

Underlying and persistent economic issues may be overshadowed by the outlandish GDP figures but it is a matter of ‘when’ not ‘if’ the headwinds facing the South African economy are exposed within the currency. 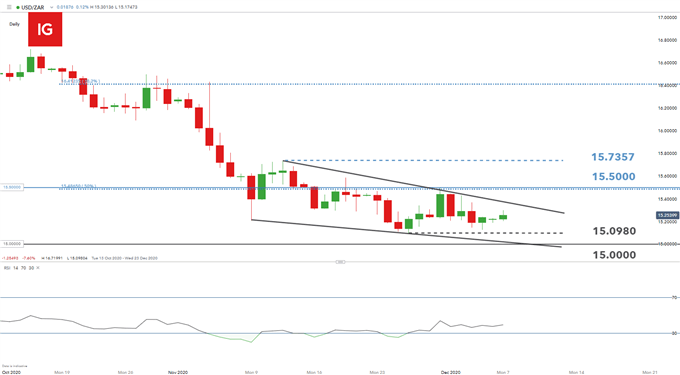 Prior to last week Non-Farm Payroll (NFP) data, the Rand clawed back much of its lost gains against the greenback. This was not enough to break below the falling wedge support line (black) or the November swing low at 15.0980. Short-term price action follows an uptrend with bulls eyeing the wedges topside resistance trendline. This triangle pattern remains significant in the medium-term outlook which could lead to a major reversal to the upside.

The Relative Strength Index (RSI) continues to exhibit upward momentum however, overall momentum remains bearish. USD/ZAR bulls will be monitoring the potential for a breakout with targets at 15.5000 and 15.7357 respectively.

The bearish case may gather some support from upcoming South African GDP figures which could see a consequent downward move toward 15.0980. Regardless of the directional movement, the falling wedge will pay a critical role in determining the medium term outlook for the Rand as a break above or below could set up price action for 2021.

The US Dollar Index (DXY) has moved out of oversold territory which could signal further strength to come in December. There are many conflicting fundamental factors at play but which will dominate as we close out 2020?