This morning’s Canada jobs report saw employment change print at 62k vs. the forecast of 20k and the unemployment rate fall to 8.5% vs. expectations that it would steady from last month’s 8.9%. While both prints beat their forecasts, they remain some of the weakest economic numbers out of Canada since the spring. 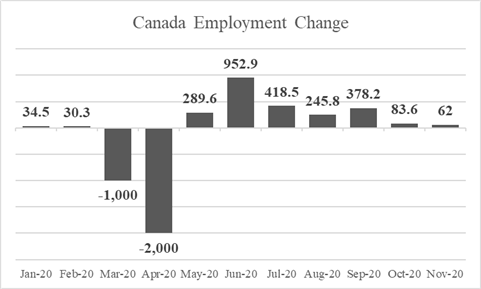 Employment Change in Canada collapsed to -2,000,000 in April during the height of pandemic lockdowns. As the Canadian economy reopened, May saw an increase of nearly 300k jobs and June saw a record increase of 952.9k jobs. July through September saw strong job growth as well.

It was not until October when the employment change report began to falter. October’s jobs printed at only 83.6k compared to September’s 378.2k. The 20k forecast for the November print further recognized the deteriorating situation in Canada’s labor market. The print of 60k strongly beat this forecast but still remains the weakest month of the Canadian economic recovery. 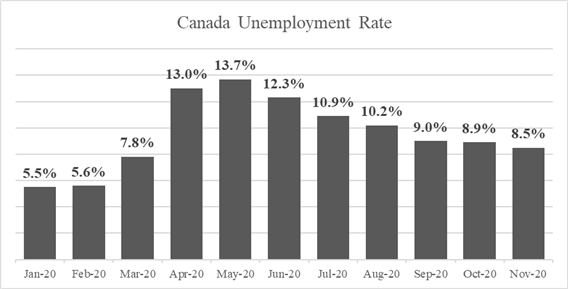 The Canadian unemployment rate tells the same story. The rate shot up in March and April as the Canadian economy was shut down and peaked at 13.7% in May. As the economy reopened and jobs returned, the rate fell by around 1% on average each month throughout the summer, reaching 9% in September. Since then, the labor market has struggled to tighten further. October’s unemployment rate printed at 8.9%, nowhere near the decline seen in summer months. November’s forecast of 8.9% reflected the expected stagnation in the unemployment rate. The print at 8.5% is a nice surprise, but Canadian unemployment continues to remain elevated in the face of the pandemic.

Despite these better than expected prints, economic data from Canada continues to point towards a weakening economic recovery. Earlier this week, annualized Q3 GDP printed at 40.5%, missing the forecast of 47.6%. COVID cases have risen sharply in Canada since September, forcing the government to reinstate certain lockdown policies. A new stimulus package of C$100 billion is expected soon, but the Canadian economy will continue to struggle under COVID is contained.

Recommended by Izaac Brook
Forex for Beginners
Get My Guide

Compared to disappointing forecast misses in American job data, the Canadian releases are a welcome surprise. USD/CAD fell following the release as the Canadian Dollar strengthened against the US Dollar. Since March, CAD has grown stronger against the USD as the Dollar continues its downward trend. 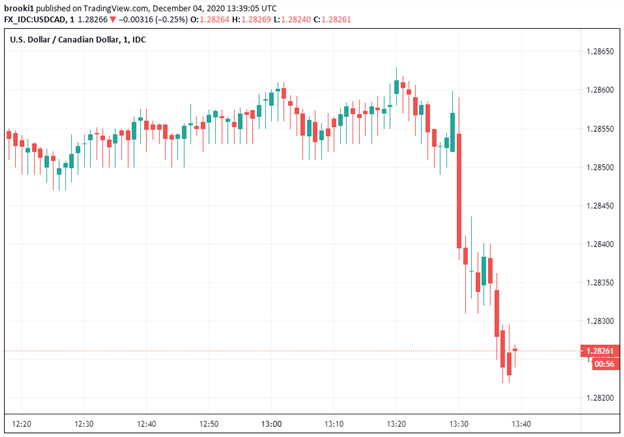