Asia-Pacific stocks look set to retrace from their recent highs as profit-taking ramped up on the last trading day of the month. Stocks in the region were largely driven by hopes for a faster pace of economic recovery with the aid of Covid-19 vaccines as well as prospects for a gradual return of globalization under Biden’s presidency. The three major US indices are hovering near their record highs, perhaps taking a brief pause before attempting higher levels. The VIX volatility index has fallen to its lowest level seen since February before bouncing back this morning.

We are probably seeing light at the end of the tunnel, but the economy is not out of the woods yet against the backdrop of elevated unemployment rates, a bumpy road to recovery as well as rising Chinese corporate bond defaults. Besides, the vaccines may not stop the virus from transmitting from one to another, according to Moderna’s chief doctor, which is adding to uncertainties about pandemic control.

The monthly performance of major global indices is summarized below, which reflects strong capital inflow into Asia-Pacific and European stocks in November. Mainland Chinese stocks were lagging behind however after registering strong gains from March to September. A “catch-up” rally appears to be taking place in markets that were badly hurt by the Covid-19 pandemic, like tourism-reliant Thailand for example. This came alongside a sectoral reshuffling in favor of cyclical sectors as investors re-position for a post-Covid world. 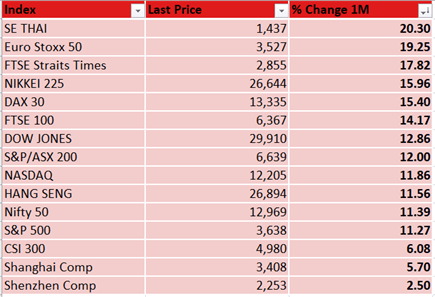 The trend of Covid-19 cases globally has shown signs of stabilizing (chart below), although the number of daily new cases is still ranging at around half a million per day. The second major pandemic wave has so far had a much smaller impact on the financial markets as compared to the first wave seen in March-April. This might be attributed to unprecedented stimulus around the world, and that governments and business owners are now much more experienced in handling the pandemic situation. 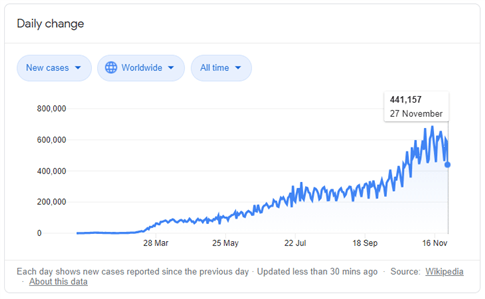 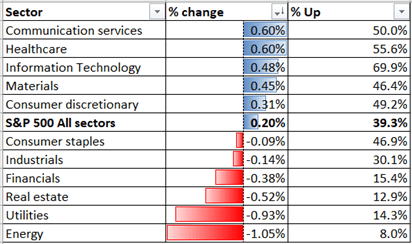 On the macro front, this Friday’s US non-farm payrolls data and several Fed officials’ speeches will be closely watched for any shift in the Fed’s policy guidance. US ISM manufacturing PMI, ADP employment as well as jobless claims data are also highly important in assessing the impact of a second pandemic wave. For the week ahead, here are the key market events: 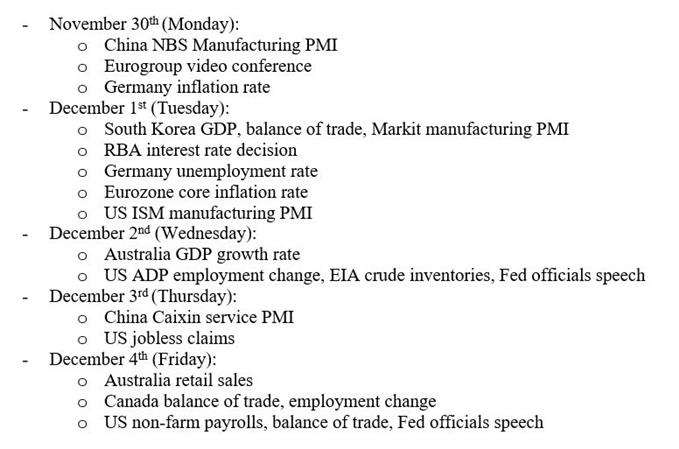 Technically, the Nasdaq 100 index appears to be hitting a resistance zone between 12,220-12,320 after failing three attempts since September (chart below). Piercing through this resistance zone may open the door for further upside potential towards 12,460. The overall trend looks bullish-biased, as suggested by its 20-, 50- and 100-Day Simple Moving Average (SMA) lines. A pullback from here may lead to further consolidation at around 12,000. 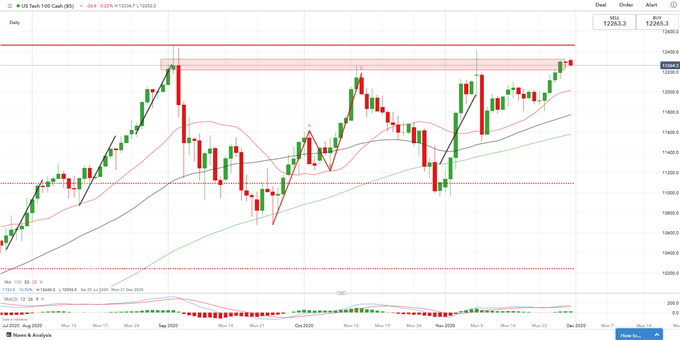 The Hang Seng Index (HSI) looks set to open decisively lower today, entering another technical correction after pulling back from a recent high of 27,000. Immediate resistance levels can be found at 27,000 followed by 27,520 – the 200% Fibonacci extension. The overall trend remains bullish-biased, as suggested by the upward-sloped Simple Moving Averages (SMAs). The MACD indicator has likely diverged with price movement recently, however, suggesting a short-term correction is possible.

The ASX 200 index entered a brief correction last week as the RSI indicator pierced into overbought territory. The overall bullish trend remains intact though, as suggested by upward-sloped SMAs and the breaking of several resistance levels. Immediate resistance can be found at 6,720 – the 50.0% Fibonacci extension.