The South African Rand is trading well below pre-lockdown levels despite a ratings downgrade last week Friday, and may be heading toward the psychological 15.0000 level before year end. Both Fitch and Moody’s provided downgrades with similar reasoning as seen below:

Many economists were taking by surprise with the downgrade, which makes the continued resilience by the Rand more captivating for analysts. It is no secret that global factors have been dictating much of the Rands movement however, significant ratings news is generally expected to have more of an impact.

The primary reason for the risk seeking behavior comes after promising COVID-19 vaccine news which has favored EM markets in the search for yield. Coupled with expected US Dollar weakness as further stimulus is anticipated. 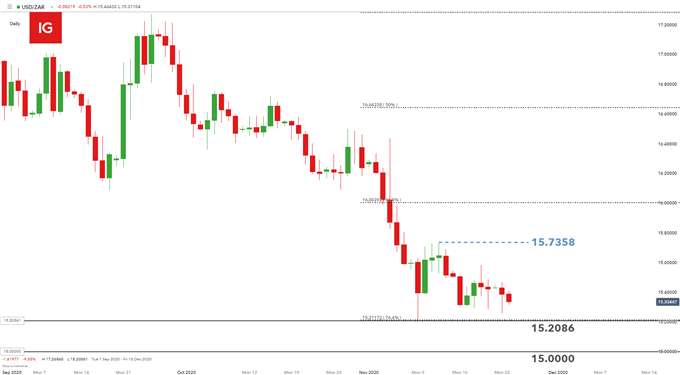 November has already seen a ZAR appreciation of roughly 5.8% against the greenback. Major confluence around the 15.0000 level could see profit taking by USD/ZAR shorts. The last time the 15.0000 level was breached was 21 February 2020. It is important to remember the poor economic condition in South Africa which has not been reflective in the local currency as yet. Rising debt, wage negotiations and other financial pressures stemming from the global pandemic could re-surface within the currency at a later stage.

The daily chart above shows the recent swing low 15.2086 coinciding with the 76.4% Fibonacci level which could serve as initial support in the case of further ZAR appreciation.

USD/ZAR bulls may use last week’s swing high as an upside target should the Rand give back recent gains. Catalysts could likely come from upcoming economic events (see below) and vaccine related news. The downward trend is still strong which lends itself to potential added downside.

This week will provide several local and US events to look out for (see economic calendar below). South African data may well be overshadowed by high impact US announcements which is in line with the recent trend of higher global weighting on the USD/ZAR currency pair. As always with economic events, any large deviation from estimates could result in major price swings on the pair which can affect trade positions.

The end of 2020 could see the Rand edge closer to the 15.0000 level, while South Africa’s fundamental frailty could play catch up next year which may see the Rand consolidate in terms of gains against developed currencies. The short-term outlook seems favorable to further Rand strength but constant monitoring of global risk sentiment is important for future price movement.