Gold prices fell to a 4-month low of US$ 1,825, primarily weighed by a string of positive vaccine news that raised prospects for a faster pace of economic recovery and thus less reliance on stimulus. Prices have likely broken a key support level at US$ 1,870 and thus may open the door for further downside potential with an eye on 1,809.

A coronavirus vaccine developed by the Oxford University and British-Swedish biopharmaceutical company AstraZeneca showed an impressive 90% effective rate in preventing the disease. This marks a third promising vaccine candidate in November, following Pfizer and Modena. A key advantage of the Astra-Oxford vaccine is its relatively low cost – at £3 a dose – compared with more than £20 for the Pfizer and Moderna vaccines. This means it might be a lot more affordable for emerging countries, especially those who face public health funding shortages.

A string of vaccine breakthroughs may point to less reliance on fiscal stimulusif they help to expedite the pace of economic normalization. Gold prices are particularly sensitive to stimulus prospects and the interest rate environment as gold is commonly perceived as a good store of value and hedge against fiat money. Since Pfizer first announced its vaccine news on November 9th, gold prices have fallen over 6.5%.

SPDR Gold Trust (GLD) – the world’s largest gold ETF with a market cap of US$ 71.5 billion – saw an accelerated pace of redemption in recent weeks (chart below). This may reflect weaker demand for paper gold. The number of GLD shares outstanding has dropped from a recent peak of 437.5 million on October 14th to 415.6 million on November 23rd, marking a 5% drop. A reduction in the number of ETF shares suggests that redemptions have outpaced subscriptions, and this trend shows no sign of reversing any time soon. 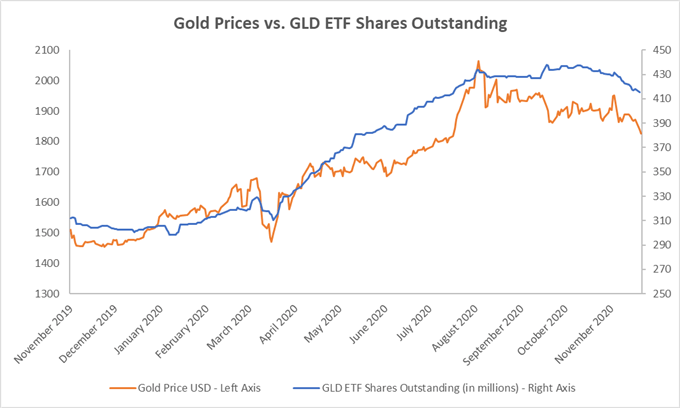 On the political front, the US General Services Administration (GSA) filed a report to inform president-elect Joe Biden that it is ready to start the transition processon Tuesday. President Trump called on his departments to cooperate. This may mark a clearing of post-election uncertainties and catalyzed a further decline in gold prices. Joe Biden has nominated former Fed Chair Janet Yellen as the US Treasury Secretary, a position in which she may play a critical role in influencing US fiscal and tax policy to foster economic recovery and tackle inequality issues.

Technically, gold prices entered a three-month consolidation after reaching an all-time high in early August. The overall trend appears to bias toward the downside, as suggested by the formation of consecutive lower highs and lower lows. A decisive break below the US$ 1,870 support may lead to further losses with an eye on US$ 1,809 – a key support level.

IG Client Sentiment indicates that retail gold traders are leaning heavily towards the long side, with 81% of positions net long, while 19% are net short. Traders have trimmed long (-7%) positions and added short (+10%) bets overnight. Compared to a week ago, traders have increased long (+5%) and reduced short (-4%) exposure.