European equities have gotten another positive start to the session led on by US and Asia gains overnight as President Donald Trump has given the go-ahead to initiate the transition of powers to the Biden Administration, after 3 weeks of legal action to try and reclaim his presidency have failed.

This latched on to an already positive session on the back of more coronavirus vaccine news, which helped positive momentum push through to this morning. Biden’s nomination for Janet Yellen to become Treasury Secretary has also been well received by the markets, as she is believed to be best suited for the job due to her experience and ability to communicate about economic policies in tough negotiations, and is seen as placing top priority on stimulus. Also, as a former Fed Chairwoman, she could possibly allow Powell more flexibility with returning the unused funds of the emergency loan programs which current Treasury Secretary Steven Mnuchin had requested be returned by the end of the year.

In Europe, news broke this morning that the German equity index DAX 30 will be expanding to add 10 additional firms by September 2021. It also aims to have tougher rules in place in the wake of the Wirecard accounting scandal, with aspiring members needing to prove they have been profitable for at least two years by providing audited annual results and posting quarterly statements. These changes will take effect from the first quarter next year, and existing members that don’t currently have an audit committee will have until August 2022 to adapt to the new rule.

The discovery of effective vaccines seem to have pushed for a consensus that rotating out of the US, primarily FANG stocks, is the way to go, focusing more on cyclicals and emerging markets. Although I am not opposing this reality, it is important to remember that there are still a number of things that can go wrong in the remainder of the year, ranging from a lack of monetary/fiscal stimulus to issues with the distribution and implementation of the vaccines.

It is always dangerous when a consensus becomes too strong, and a possible example of this is the notion that there needs to be a rotation out of the US Dollar. Yesterday we saw how better than expected US PMI figures reversed the DXY’s losses and triggered some stops along the way, leading to some-what of a short squeeze, a small show of what could happen if too many investors are caught to be excessively long in cyclical stocks.

The DAX 30 is still struggling to push above the resistance found at 13326, an area which has been key at halting bullish sentiment on the run up from March 2020 lows. With the daily moving averages now placed in descending order and a MACD that is holding in positive territory, the path of least resistance seems to be higher at the moment.

A daily close above the September high at 13460 is probably needed to confirm a continuation of the bullish run seen from the October lows, although the Put/Call ratio for today is at 1.61, suggesting that bearish sentiment is building in the market, rising to 1.98 for the options expiring this Friday the 27th. 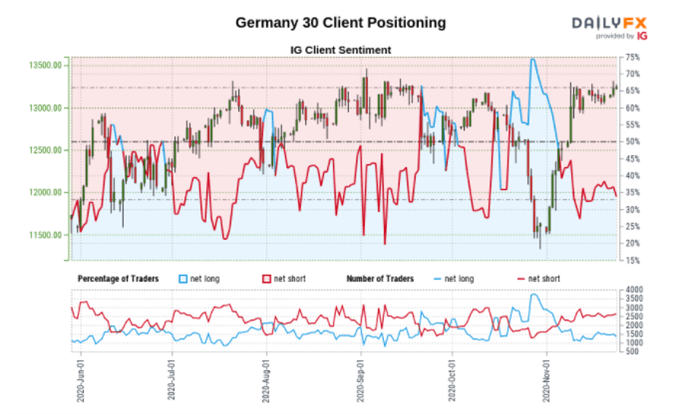 We typically take a contrarian view to crowd sentiment, and the fact traders are net-short suggests Germany 30 prices may continue to rise.

Traders are further net-short than yesterday and last week, and the combination of current sentiment and recent changes gives us a stronger Germany 30-bullish contrarian trading bias.