S&P 500 Forecast: How Will the Addition of Tesla Impact the Index?

S&P 500 Forecast: How Will the Addition of Tesla Impact the Index?

Earlier this week S&P Dow Jones Indices, the curator of the S&P 500 benchmark index, announced Tesla will be added to the prestigious collection of stocks on December 21, 2020. After successfully recording four consecutive quarters of profitability months ago, Tesla has met the criteria for S&P 500 inclusion ever since. Thus, some Tesla stockholders and fans had begun to question the delay.

While the S&P 500 is the most widely-watched benchmark for investors and traders – particularly in the passive investing space – the fund curators do have some discretion as to when stocks are added beyond the rigid requirements. Without direct reasoning from the index curators, it seems the delay could have been to observe volatility in the stock as some analysts believe it has ballooned into a bubble, or to begin planning its inclusion, which is set to be a herculean effort. 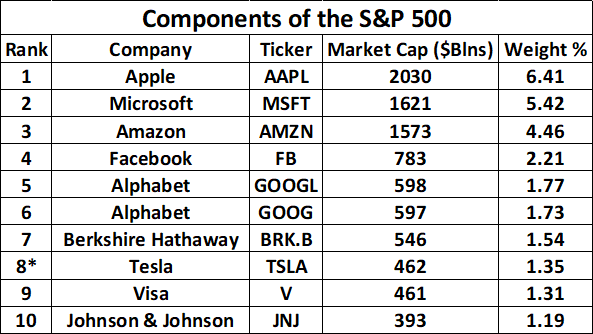 Source: Bloomberg, data as of November 18, Tesla ranking and positioning are projections*

Possessing a market capitalization of more than $460 billion, Tesla will be the largest single-stock addition to the S&P 500 in its history and it has a volatile track record. As a result, the stock could give rise to heightened volatility for the broader index. Still, its weighting on the S&P 500 will likely rest at around 1.4% given market pricings at the time of writing, so any knock-on increase in S&P 500 volatility will be largely immeasurable to the average retail investor.

Further still, there is some evidence to suggest making it into the prestigious S&P 500 can hurt a stock’s performance because the increase in passive holders gives rise to less active shareholders which can lead to a series of other pitfalls. Without going into the laborious details of the study, it does seem there are at least some considerations to be made when forecasting Tesla’s share price trajectory once it is in the S&P 500.

Finally, due to the largely passive nature of investing in the S&P 500, Tesla’s inclusion into the index may make the stock itself less volatile. As funds and institutions crowd to gain exposure to the stock to track the S&P 500, retail investors and long-term believers may take the opportunity to reduce their holdings knowing the pool of buyers has increased.

This change of hands has likely played a role in the stock’s price gains over the last few days, but it could mark the beginning of the end for volatility in the stock as we know it. As shares shift from retail traders and active investors to institutions and passive investors, the breakneck speed at which Tesla shares have moved in the past might give way to a more passive style with a longer time horizon.

Either way, an immediate change of character in the S&P 500 once Tesla is included seems highly unlikely. Indeed, it seems Tesla is more likely to conform to the attitude of the other components and that could dampen some of its volatile tendencies. As for Tesla’s share price, it can be argued price has been detached from profitability for a long time, so attempting to forecast where it moves from here may be more art than science. In the meantime, follow @PeterHanksFX on Twitter for updates and analysis.