Gold prices fell for a second day to US$ 1,880, primarily weighed by a string of positive vaccine news that raised prospects for a faster pace of economic recovery and less reliance on stimulus. Pfizer’s CEO Albert Bourla said the company’s Covid-19 vaccine has reached a key safety milestone and is seeking approval from regulators for emergency-use authorization. Together with Moderna’s vaccine, which was tested 94.5% effective in a clinical trial, there might be two promising vaccines available for initial use by year end.

Major vaccine breakthroughs may point to less reliance on fiscal stimulusif they help encourage a pickup in economic growth. This assumption appeared to be the primary drag on gold prices, which have lost more than 3.7% since Pfizer first announced its vaccine success on November 9th. Gold is very sensitive to stimulus prospects and the monetary environment as it is widely perceived as a good hedge against fiat money and a store of value.

Demand for physical gold seems to have lost steam too, according to Singapore’s non-oil domestic export (NODX) data released on November 17th. The country registered a 61% YoY plunge in non-monetary gold shipments in October, reversing a strong growth trend in the first nine months of the year. A sharp contraction in Singapore’s bullion exports may reflect a reduction in demand for investment gold, in particularfrom the US, European Union and the UK. A much weaker-than-expected non-electronics shipments reading, alongside a tepid electronics segment, have dragged Singapore’s overall non-oil exports down by 3.1% YoY. 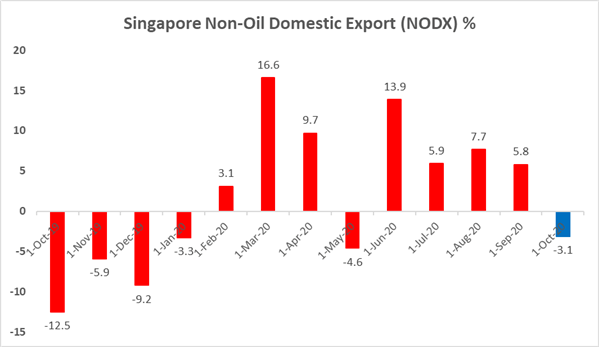 In view of rapidly climbing coronavirus numbers around the globe and stricter lockdown measures, fiscal support still seems very much needed to help economies to weather through the pandemic in the near term. The monetary environment is likely to stay accommodative in the foreseeable future to contain systemic risk and foster a fragile recovery. This could potentially offer prices some support, although the medium- to long-term outlook has likely turned bearish.

Some near-term catalysts for gold might include uncertaintiessurrounding the post-election transition, the US relief package, and a potential re-escalation of US-China frictions during the last two months of Donald Trump’s presidency.

Technically, gold prices entered a three-month consolidation after reaching an all-time high in early August. The overall trend appears bearish-biased, as suggested by consecutive lower highs and lower lows. A “Death Cross” has likely formed after the 20- and 50-Day Simple Moving Average (SMA) lines crossed below the 100-Day. The formation of a large bearish candlestick on November 9th reflects strong bearish momentum, which could lead to further losses with an eye on US$ 1,870 support.

IG Client Sentiment indicates that retail gold traders are leaning heavily towards the long side, with 81% of positions net long, while 19% are net short. Traders have added long (+3%) positions and stayed unchanged for short overnight. Compared to a week ago, traders have reduced long (-5%) and added short (+24%) exposure.