Stocks were unable to hold positive momentum on Tuesday as market optimism over a vaccine stalls amid ongoing spread of the virus and social restrictions. But this wider-themed rotation of capital is likely to continue despite it not being as bold as it has been for the past 7 days.

In fact, smaller stocks are the ones that have benefited the most from this shift in momentum in the past week, alluding to the “size effect”, in which smaller stocks will have greater returns over time, all else equal. We are also witnessing a slight shift from US stocks to more risky European stocks, given US tech firms have been the safe-haven traders have looked for during the pandemic. In general terms, up until the month of September, US indices had managed to grow between 60% and 80% since the low in March, whilst European indices peaked at around 40%, excluding the DAX 30, which has been the outperformer in Europe. This allows for European equities to have a greater growth potential going forward, just based on them having lagged during the summer months.

EUROPEAN EQUITIES OUTPERFORM THE US AFTER VACCINE NEWS 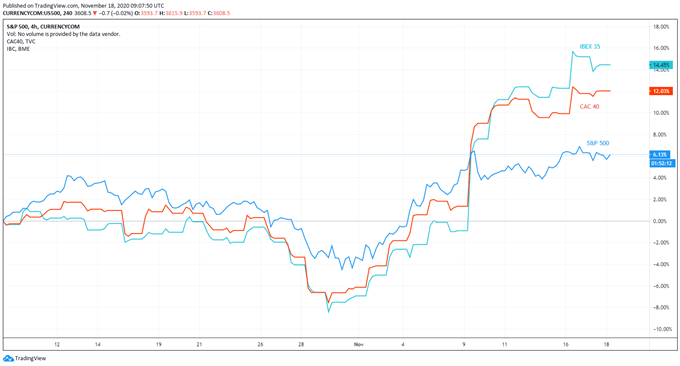 This alone is a positive factor for European equities, given they are mostly made up of value stocks which are now in high demand. But caution is still present as investors worry about the future of these hard-hit economies, especially heading into the summer season of 2021. A fruitful vaccine in the next few months would remove most of this uncertainty, allowing for European stocks to realise their full potential in a forward-looking scenario, where economic recovery is likely to take its natural course.

But for now, Europe remains as the hardest-hit region of the second wave. France, where total cases have surpassed the 2 million mark, is the European country with most cases, and fourth in the world, only after the US, India and Brazil. 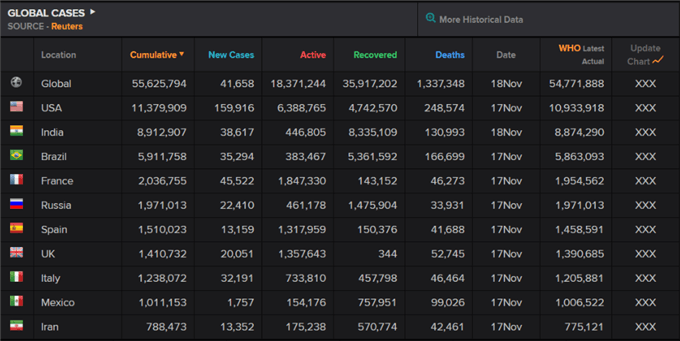 The country is currently under a 4-week strict lockdown imposed at the beginning of November, but its health minister has recognized that these efforts are bearing fruit, as new cases are slowly starting to decline. This allows locals to be hopeful about saving the Christmas period, an important spending period on which the growth of the economy will rely on in Q4, after what can be expected to be contractions in October and November.

Looking at its daily chart, the CAC 40 seems to have been caught under its 76.4% Fibonacci retracement from the 6111 to 3502 drop, an important area to surpass if it wishes to catch up with its US counterparts. This confirms 5495 as a short-term resistance, but momentum indicators suggest a continuation of the upward trend, therefore putting focus on 5705 as the next hurdle, an area of increase selling pressure in the past. On the flip side, a move below the 61.8% Fibonacci at 5114 will invalidate this trend.

When referring to technical analysis, I think Fibonacci levels are a key indicator to focus on at present given that they allow for comparison between different assets on the health of their recovery from the coronavirus-led moves. Especially as we start to see a light at the end of the tunnel, an important strategy is to look for undervalued/oversold stocks that have great growth potential given the end of the pandemic, and Fibonacci levels are a great tool to do that on a wider, index level.