WTI crude oil prices moved higher alongside risk assets after Moderna said its coronavirus vaccine was tested 94.5% effective in preventing the disease. The results were based on an interim analysis of a late-stage clinical trial, which echoed Pfizer’s vaccine breakthrough earlier last week. It means that the US may have two types of coronavirus vaccines available for emergency use as early as December. Unlike Pfizer's vaccine, Moderna's shot can be stored at normal refrigerator temperatures, which should make it easier to distribute

Another vaccine breakthrough has raised hopes for a faster pace of economic recovery and thus brightened the prospects for the medium- to long-term energy demand. Stock markets reacted swiftly in response to the news, with cyclical energy (+6.5%) and industrial (+2.48%) sectors among the best performers on Monday.

The OPEC+ coalitionis holding a meeting on Tuesday, in which the major oil producers may freeze aplanned Januaryproduction hikeby 3-6 months as a second pandemic wave hurts global oil demand. Since markets have long been anticipating a deal, the actual announcement of a freeze could potentially result in a “buy the rumor, sell the fact” reaction.

Demand remains a major drag for oil prices, which appeared to be capped by escalating pandemic risk and a lack of immediate vaccine solutions. The EU and the US are risking further lockdowns and social distancing measures should the situation worsens. This may have an adverse impact on energy demand.

US crude inventories rose by 4.27 million barrels in the week ending November 6th, which contradicted a 5.15-million-barrel draw in the API report and also far exceeded the market’s forecast of a 1.9 million-barrel rise. A larger-than-expected increase in stockpiles sank WTI prices to as low as US$ 40.30 last week. The next EIA DOE crude oil inventory report will be released on November 18th, with expectation of a 1.6-million-barrel increase. The historic negative correlation between crude oil prices and DOE inventory changes can be viewed in the chart below. 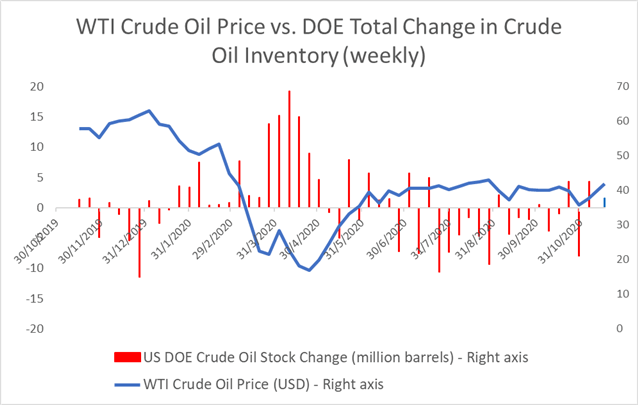 Technically, prices appear to be facing a key resistance level at US$ 42.00, which it failed to break several times in the past few months. Breaking 42.00 will likely opened the door for further upsides with an eye on US$ 43.80 – another key resistance level. In the event of a pullback from here, an immediate support level can be found at US$ 40.40 – the 100-Day Simple Moving Average (SMA) line.