China’s robust economic recovery from the February doldrums may continue to underpin the trade-sensitive Australian Dollar in the medium term.

The rate of growth in overall business activity was the joint-quickest in just under a decade, supported by strong manufacturing production and services activity.

The Chinese government is also yet to unleash trillions of yuan in stimulus, which suggests that a more extensive recovery could be in the offing.

Beijing ordered regional governments to sell 3.75 trillion yuan of bonds by the end of October, building on the 2.27 trillion sold in July and surpassing the total amount of debt issued in 2019.

Therefore, with a substantial fiscal safety-net in place it appears the world’s second-largest economy is set to continue expanding this year, which may ultimately buoy regional risk appetite and in turn put a premium on the cyclically-sensitive AUD.

As noted in previous reports, escalating Australia-China trade tensions may prove to be a major headwind for the Aussie Dollar and regional risk assets.

However, the signing of the world’s largest regional free-trade agreement could soothe relations, as the Australian government attempts to pull Beijing back into multilateral negotiations and end the tit-for-tat exchanges that have threatened over $20 billion of exports.

Member Countries of the RCEP 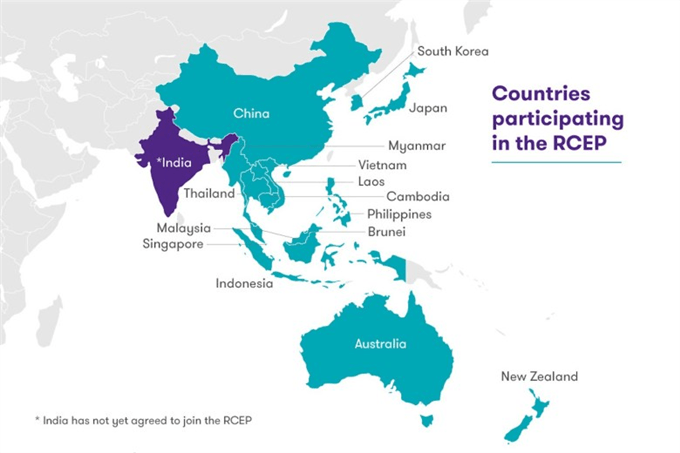 Australian Trade Minister Simon Birmingham believes that the RCEP will provide a platform to mend relations, stating that “I think these are times of tension between the two great powers and the more we can use the existing architectures for dialogue at an economic or security level, the better”.

Of course, it is yet to be seen if this historic free-trade agreement will prove successful in repairing Sino-Australian relations. Nevertheless, the potential for constructive dialogue could firm regional market sentiment and buoy risk-sensitive assets. 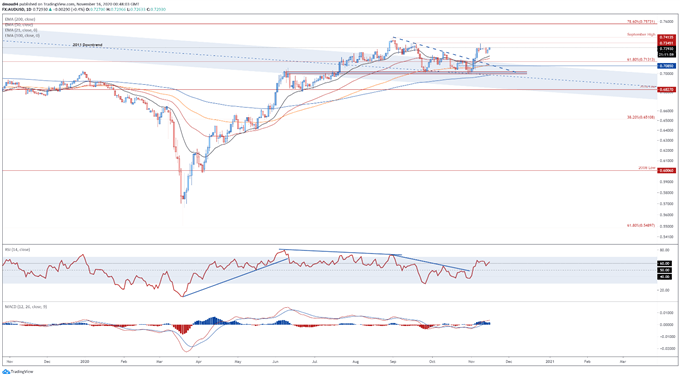 The technical outlook for AUD/USD remains skewed to the topside as price continue to track firmly above all four moving averages and key psychological support at the 0.7200 mark.

With the RSI eyeing a push into overbought territory and the MACD indicator climbing to its highest levels since mid-September, the path of least resistance appears to favour the upside.

Alternatively, breaching support at the 21-day moving average (0.7196) could inspire would-be sellers and ignite a pullback towards the 61.8% Fibonacci (0.7131). 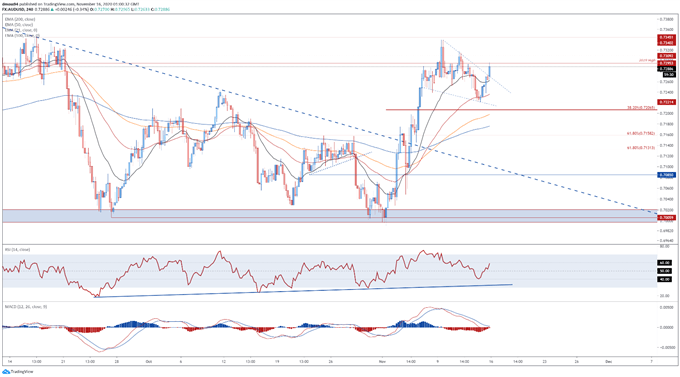 Zooming into a four-hour chart bolsters the bullish outlook depicted on the monthly timeframe, as price breaks above Falling Wedge resistance.

A bullish crossover on the MACD indicator, in tandem with the steepening slope of the RSI, is indicative of swelling buying pressure.

Pushing through that would likely see price begin to probe key resistance at the September high (0.7413). 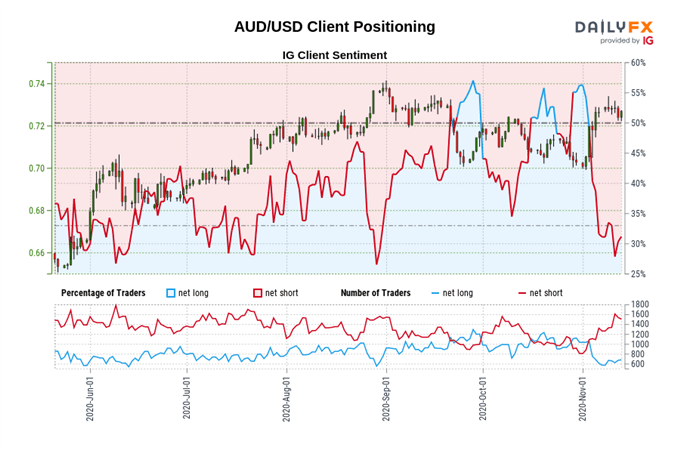