Bitcoin continues to stair-step higher and today made another multi-year high around $16,500. We looked at BTC yesterday and suggested that the positive daily chart set-up remained intact, with little in the way of horizontal resistance seen on the chart until $17,200, the January 2018 monthly high.

A Look at the weekly chart shows how Bitcoin has quadrupled in value over the last eight months after hitting a spike low just under $4,000 in early March this year. Since then the chart has produced a series of higher highs and higher lows with Bitcoin rallying by around $5,000 in the last month alone. While the recent volatility leaves BTC vulnerable to a sharp sell-off, both the daily and weekly charts suggest that the path of least resistance for Bitcoin is higher. 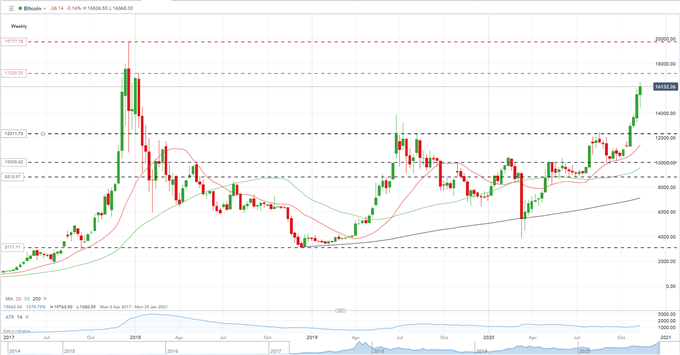 While the technical set-up for Bitcoin remains positive, the fundamental outlook is also favorable as central banks around the globe continue to pump money into their respective economies - boosting money supply - in an effort to boost growth and inflation. Long-term advocates of Bitcoin have argued that its fixed issuance – 21 million - acts as a hedge against currency depreciation, via inflation and money printing, while the increased use of Bitcoin as means of payment adds to its value.

Global online payment system PayPal is now allowing its customers to use Bitcoin (BTC), Ethereum (ETH), Bitcoin Cash (BCH) and Litecoin (LTC) to not only pay for goods via cryptocurrencies but to also buy, hold and sell cryptocurrencies via its new app. PayPal recently announced that due to strong customer demand that it would increase its weekly cryptocurrency purchase limit from $10,000 a week to $20,000 a week with immediate effect.

In early October, Square, an American financial services and mobile payment company, bought $50 million worth of Bitcoin believing ‘that cryptocurrency is an instrument of economic empowerment and provides a way for the world to participate in a global monetary system’, according to CFO Amrita Ahuja.

IG client sentiment data show 81.73% of traders are net-long with the ratio of traders long to short at 4.47 to 1.Yet traders are less net-long than yesterday and compared with last week. Recent changes in sentiment warn that the current Bitcoin price trend may soon reverse higher despite the fact traders remain net-long.

What is your view on Bitcoin – bullish or bearish?? You can let us know via the form at the end of this piece or you can contact the author via Twitter @nickcawley1.