WTI crude oil prices climbed for a third day to US$ 42.00, riding the tailwinds of election results, encouraging vaccine news, and a large-than-expected draw in US inventories.

The world’s largest pharmaceutical company Pfizer announced earlier this week that its Covid-19 vaccineshowed a 90% success rate in an interim analysis of its phase 3 clinical trial. The major vaccine breakthrough raised hopes for a faster pace of economic recovery and thus brightened the prospects for energy demand. Stock markets were starting to price in the potential impact of a successful vaccine, with investors rotating out of tech stocks into energy, industrial and other cyclical sectors.

A much larger-than-expected fall in US crude stockpilesalso helped to boost energy prices. According to the American Petroleum Institute (API), US crude inventory fell by 5.15 million barrels in the week ending November 6th, compared to a 0.89-million-barrel estimate.Gasoline and diesel stockpiles also decreased. In the previous week, API reported a 7.99-million-barrel draw, whichcontradicted forecasts calling for a 0.89 million rise.

A tepid demand outlook may limit oil’s upside, however, as a new round of lockdown measures in many European countries and tighter border controls may point to further weakness in energy demand. Even if Pfizer’s vaccine is proven successful, it may still take several months before it becomes publicly available.

According to data compiled by Flightrader24, the ascending trend of the global daily flight count appears to have stalled recently after registering an impressive rebound during the April-August period (chart below). The 7-day average of flight counts is still 22.5% below the same period last year, reflecting soft demand for fuel. 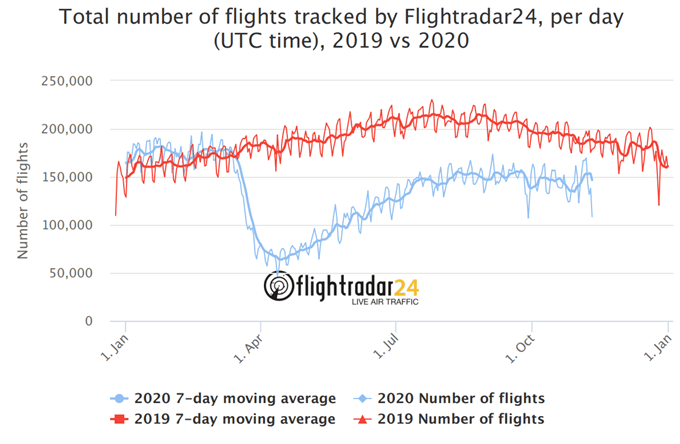 More than 6.9 million new Covid-19 cases were reported globally in the past 14 days. The US alone registered more than 130k new infections on 9th November, marking a cross above 100k for 6 days in a row. More stringent lockdown measures and border controls around the globe may have a negative impact on energy demand in the winter.

The next EIA DOE crude oil inventory report will be released on November 12th, with expectation of a 1.9-million-barrel drop in crude stockpiles. In view of a 5.15-million-barrel decline from the API report, the actual number from the EIA may beat consensus too. The historic negative correlation between crude oil prices and DOE inventory changes can be viewed in the chart below. 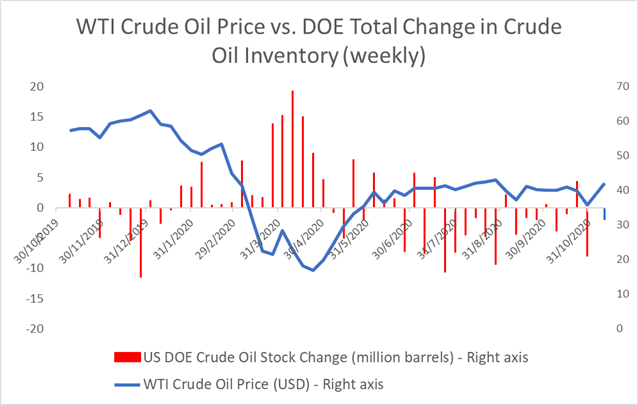 Technically, the near-term trend of WTI crude oil prices has turned bullish last week. The prices have penetrated through key resistance at 41.50 and thus have opened the room for further upsides with an eye on US$ 43.80 – a key resistance level. The MACD indicator has formed a “Golden Cross”, showing strong upward momentum. An immediate resistance can be found at around US$ 42.5 – the upper Bollinger Band.