Markets initially expressed a risk-on tilt with polling data that at first showed a strong lead for former Vice President and Democratic nominee Joe Biden. The haven-linked US Dollar fell along with the anti-risk Japanese Yen while gold prices, crude oil, the Australian and New Zealand Dollars all rose. I wrote about this as a possible market dynamic in a report two hours before it manifested here. 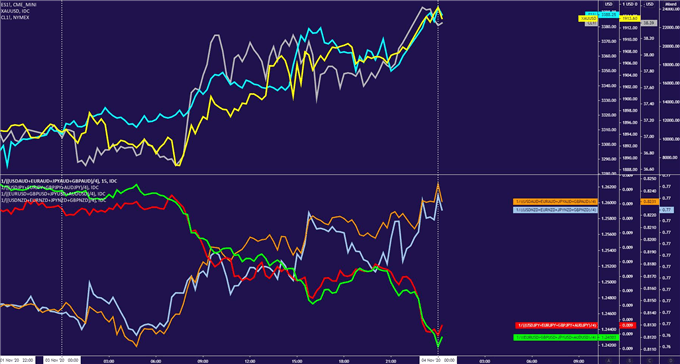 However, as the race for Florida tightened, we saw market sentiment reverse as more focus was placed on a key battleground state that holds the third-most electoral votes. Every candidate that won the presidency in each election since 1992 conquered Florida. Market sentiment further deteriorated after polls began to show Trump leading in Pennsylvania. 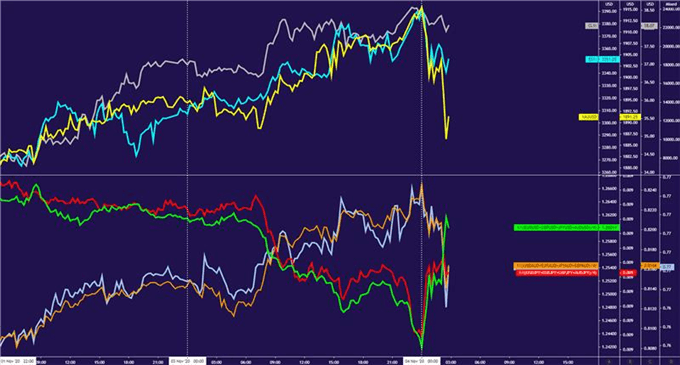 As I had written before, the surge in volatility and swift comeback of the US Dollar comes in part due to markets being thrown off by the unexpected spike in Mr. Trump’s popularity. This is because Democrats as a group are more likely to vote by mail than Republicans who are statistically more inclined to vote in person. Investors’ strong reliance on polling agencies may therefore have given them a false sense of certainty.

In tandem with these developments, betting markets initially showed spreads indicating a strong underlying confidence of a Biden win, but now these are strongly tilting towards Trump. Some spreads are now as high if not higher than they were in 2016 when he ran against then-Democratic nominee and Secretary of State Hilary Clinton.

Looking ahead, if polls continue to indicate a growing likelihood that Mr. Trump will win the election, then the aforementioned risk-off dynamic may be magnified. Having said that, Mr. Biden is expected to win California which carries the most electoral votes out of any state. Due to the fluidity of the situation, to give any immediate forecasts now on polling data may be quickly outdated.

One thing traders can expect though for now is political volatility jumpstarting violent oscillations in high-beta assets like AUD, NZD, oil and equity futures. To learn more about why the implications of a Trump presidency are having a risk-off tilt in market mood and the opposite for Biden, see our landing page on how to trade the election with a focus on policies markets are concerned about being implemented.