Market Reaction to US Elections: Risk Off, USD Up, Stocks Down, Gold Lower

US elections, market prices and what happens next:

Haven bid for USD on US election stalemate

The US elections have resulted in the worst possible outcome for the markets: no clear winner in the Presidential race, the incumbent Donald Trump falsely claiming victory and the prospect of days of uncertainty as Trump attempts to rule out the counting of postal votes likely to favor Democratic rival Joe Biden.

Meanwhile, the Democrats look to have failed to win the Senate from the Republicans – the “blue wave” wrongly predicted by pollsters – so even if Biden becomes President he will likely face difficulties pushing through legislation.

This has been dubbed the “nightmare scenario” for markets: Trump declaring victory ahead of time, potentially hiring lawyers to stop postal votes being counted and a split Congress with the Senate still in the hands of the Republicans and the House of Representatives still with a Democrat majority.

Market response to US election

Unsurprisingly, markets in Asia and then Europe have taken this badly, with a move from risk-on assets like stocks into risk-off assets like US Treasury notes and bonds, and sentiment is unlikely to improve significantly for hours, days or even weeks.

Among the most important moves, the US Dollar index has been climbing since around 0500 GMT as the possibility of a stalemate has risen, reaching 94.14 before easing back to just below the 94 level. A move into the safety of US Treasuries has shaved around nine basis points from the yield on the 10-year note and the price of gold – once but no longer seen as a haven asset – has eased back.

As for stocks, S&P 500 futures have recouped earlier falls but the benchmark indexes in London, Frankfurt and Paris are still down by 0.2%, 1.2% and 0.4% respectively in early business. 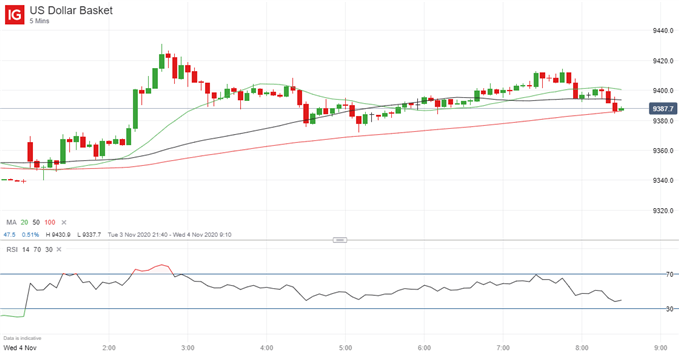 Recommended by Martin Essex, MSTA
Download our Q4 US Dollar forecast
Get My Guide

Looking ahead, the markets could benefit from a reduction of political risk once the election results are known and from a Republican Senate that could block Democrat plans to roll back corporate tax cuts, clamp down on the tech industry and raise capital gains tax. However, agreement on a fiscal stimulus package now looks as far away as ever and near-term political risk remains elevated as Trump accuses the Republicans of trying to steal the election.