Silver and Copper have been in a consolidative state since the end of September. Investors have been kept on the edge, awaiting the outcome of another US fiscal stimulus package. Now, with the US presidential election just around the corner, will its outcome determine what is to come for XAG/USD and the ‘red metal’?

On the chart below, I have highlighted the relatively inverse relationship between the haven-linked US Dollar and silver and copper throughout this year. XAG/USD can at times be seen as an anti-fiat hedge, similar to gold. A by-product of easing measures the Federal Reserve took this year to support the economy was a cheaper Dollar as volatility ebbed. This boosted silver prices, which are still up over 30% this year.

Copper is typically seen as a bellwether for global growth. After falling about 30% from January to March during the early stage of the coronavirus outbreak, the red metal proceeded to soar over 60% before stabilizing over a month ago. This likely reflected rising hopes for a recovery as nations across the world embarked on stimulus measures, both monetary and fiscal, to jumpstart a world economy that ground to a halt amid virus-containing lockdowns.

Now in the near term, silver and copper prices are awaiting the results of the US election. In addition to the fate of another stimulus package, the continuation of trade wars is also on the table. Rising prospects of a Biden-win scenario have opened the door to more aid, depending on the makeup of the Senate. This could in turn bode well for silver and copper prices.

A victory for incumbent Donald Trump will likely stir volatility in the coming days. That may boost demand for liquid hedges, of which the US Dollar and Treasuries are the traditional go-to options. Such an outcome could dent silver and copper prices. As the fire settles down however, fears of escalating US-China tensions could throw off the red metal’s ascent. Still, a low-interest-rate environment can help limit downside potential. 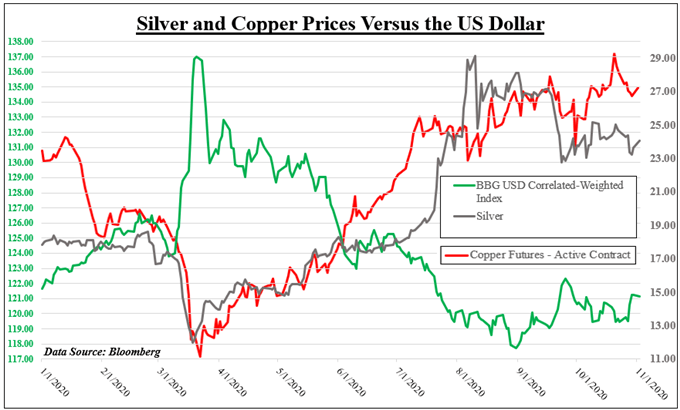 Silver prices are pressuring a descending channel of resistance from late August. The technical outlook is slightly tilted to the downside in the aftermath of a bearish ‘Death Cross’. That was formed in September when the 50-day Simple Moving Average (SMA) crossed under the 20-day SMA. Meaningful upside progress likely entails a push above the 25.04 – 25.56 resistance zone. A resumption of the July top would place the focus on the September low at 21.66.

After persistent losses since late October, copper futures paused declining on the 50-day SMA and the upper boundary of a rising channel of support from March. A climb above the 3.0945 inflection point exposes 3.2180 for an attempt to resume the dominant uptrend towards 2018 highs. Otherwise, a drop under rising support exposes the 2.8775 – 2.8345 support zone towards the August low.