Nasdaq 100 Pre-Election Outlook: What Sectors Are at Risk?

Nasdaq 100 Pre-Election Outlook: What Sectors Are at Risk?

The Nasdaq 100 is the worst performer among the three main US indices Monday, a byproduct of continued weakness in the technology sector. While weakness in the crucial sector has led to declines, it is also understandable to some degree as investors shy away from one of the riskier corners of the market ahead of the essentially unparalleled event risk of the US Presidential election. Beyond the election, markets await major central bank decisions and jobs data later this week.

Further still, both implied and actual volatility remain heightened so it is almost hard to fault some investors for reducing exposure at this stage. That being said, it is important to consider whether weakness in the technology sector will persist after the election or if it is just a momentary blip before a continuation higher. 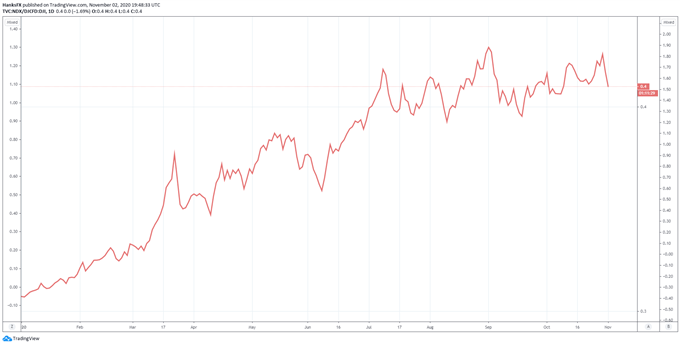 To be sure, the ratio between the Nasdaq 100 and the Dow Jones has weakened over the last few trading sessions and remains beneath its peak on September 1. While the initial effect of the coronavirus on the stock market led to outsized gains in some technology stocks that were well positioned, largely the opposite was true for the Dow Jones.

More traditional stocks on the Dow Jones like Boeing, Caterpillar and Goldman Sachs lost out to the quarantine favorites of corporations like Zoom, Peloton and Netflix. This dynamic allowed the ratio between the two indices to balloon.

Now, however, polling data suggests a Biden presidency is likely which may distort the recent relationship between the Dow Jones and the Nasdaq as tax hikes and infrastructure spending become possibilities. While both parties have displayed an appetite for increased regulation on the biggest names of the technology sector, the proposed corporate tax hike from the Biden camp may materially reduce earnings if enacted and weaken the Nasdaq 100 as a result.

On the other hand, a Biden presidency may see trade practices between the United States and other economies become more normalized – possibly removing uncertainty from the global trade equation and boosting technology stocks with sensitivities to China. That being said, I am hesitant to suggest the removal of uncertainty would outweigh a material drawdown in earnings due to increased taxes, at least initially. 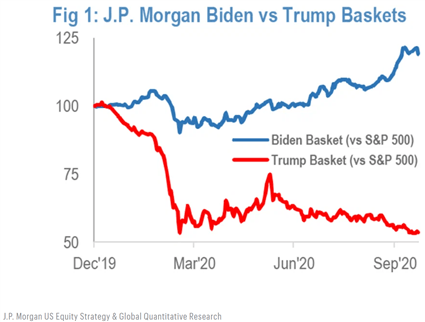 Elsewhere, the Biden camp has proposed plans for an infrastructure package, clean energy initiative and rotation away from fossil fuels. Such a strategy could see sectors like materials, industrials and clean energy receive a boost, while traditional energy stocks may take a hit.

Already, however, the energy sector has become the smallest in the S&P 500 and Exxon Mobil – a formerly longstanding member of the DJIA – has been removed from the blue chip index entirely. Evidently, the rotation away from energy has already begun so the market may not feel the same damage it may have felt in the past.

Either way, the tax proposals may create headwinds for various sectors – particularly the tech industry and the Nasdaq 100 by extension – while spending plans might offer a boost to the more industrial-leaning Dow Jones. Therefore, a potential Biden win may not see the Nasdaq 100 fall outright, but it could continue to feed into a weakening ratio between the Nasdaq 100 and the Dow whereas another Trump presidency might see technology stocks recoup recent losses.

Suffice it to say, uncertainty is rampant ahead of November 3 and volatility remains a likely outcome, but there are surely trading strategies to consider regardless of the intraday swings that might occur. As the election unfolds, follow @PeterHanksFX on Twitter and check back at DailyFX.com for updates and analysis.