Dow Jones index futures fell nearly half a percent on early Monday, as traders eye the US election this week. Meanwhile, a continuous surge in the number of Covid-19 infections and a lack of stimulus support have dampened the global recovery outlook. More than 600,000 new coronavirus cases were reported over the past 14 days, marking a fresh record. Further lockdown measures imposed by the UK government suggest that the worst is probably not here yet.

Asia-Pacific stocks attempted to defy gravity on the first trading day of November, with equity futures in Japan and Hong Kong leading up higher. Traders are facing a super busy week ahead with the US election, global manufacturing PMI figures, RBA, BoE and FOMC meetings among the top events.

Although the Democratic presidential candidate Joe Biden appears to have a solid lead in recent polls (chart below), the tail risk of a ‘Trump-win’ scenario can’t be totally ignored. The memory of 2016 is still fresh in traders’ mind, rendering risk-sensitive assets - the Dow Jones, S&P 500, Nasdaq 100, the US Dollar, the Australian Dollar, Japanese Yen, gold, and crude oil prices vulnerable to unwinding activities should the election outcome derail expectations. 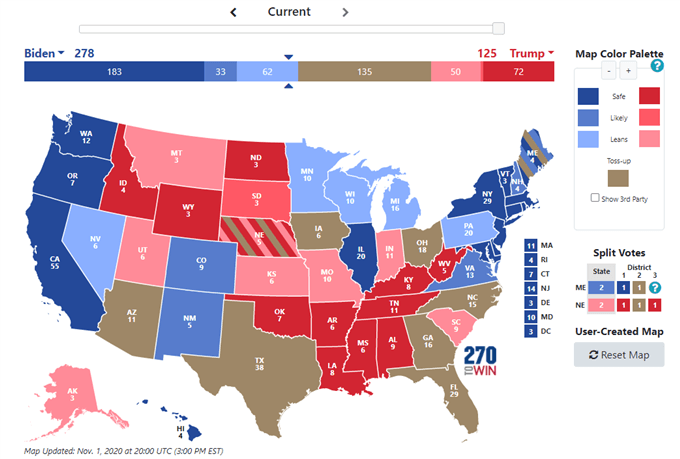 On the macro side, a string of Markit manufacturing PMI figures will likely set the tone for Asia-Pacific trading, including data from Australia, Indonesia, Japan, South Korea, Taiwan, Thailand, China and India. Economists anticipate China Caixin manufacturing PMI to remain in the expansionary territory at 53.0, despite recent headwinds due to a Covid-19 resurgence in the EU and the US.

This week’s key market events include:

Technically, the Dow entered a consolidative period in early September and the overall trend appears to be bearish-biased. The index has likely broken a key support level at 26,600 (23.8% Fibonacci retracement) last week and has since opened the room for further downside potential. The 20-, 50- and 100-Day Simple Moving Average (SMA) lines are about to form a “Death Cross” (chart below), which may signal a medium-term trend reversal. Widening Bollinger Band width also points to strong downward momentum, though a technical rebound is still possible as the index appears to be temporarily oversold.

Hong Kong’s Hang Seng Index looks set to open higher at around 24,200 following a heavy selloff seen last week. Investors are waiting for Ant’s debut on the Hong Kong Stock Exchange this Thursday, November 5th. Ant Financial, an affiliated fintech company of Alibaba Group, has received overwhelming demand from investors. The retail trench of its IPO was more than 60 times over-subscribed. Given its huge size, its listing may exert temporary downward pressure on the Hong Kong stock market.

Technically, HSI has also likely entered consolidation, with an immediate support level found at 23,990 – the 50% Fibonacci Retracement (chart below). There were two long bearish candlesticks formed on the daily chart last week, suggesting strong selling pressure in the near term. The MACD indicator has also pointed to a weakening momentum recently. An immediate resistance level can be found at 24,530 (20-Day SMA).