The Balancing Act of the Mid-Term Budget Policy Speech

Finance minister, Tito Mboweni is scheduled to deliver the mid-term budget policy speech at 12:00 GMT after a one week delay. The delay was necessary to account for the funding aspect of President Ramaphosa’s Economic Reconstruction and Recovery Plan, which seeks to stimulate economic activity in key areas of the economy that have been exacerbated due to the coronavirus.

Many observers will be eagerly awaiting to hear the latest developments around South African Airways (SAA) to gauge government’s level of support for failing state owned enterprises (SOEs) as a major taxpayer concern. Also in focus in the need to stimulate small and medium enterprises within the formal and informal sectors as this presents a major opportunity for job creation.

Another huge item on the agenda will be whether there is sufficient wiggle room within the revised budget to fund the initiatives outlined in the economic reconstruction and recovery plan.

Ratings agencies will be keeping tabs on what is being discussed, especially with regard to debt containment with many estimating the debt to GDP ratio is likely to reach 100% by 2023/2024.

Looking at the daily chart, it is clear that the long term downtrend remains intact. The trend remains steadfast especially when considering the steady decline in volatility (shown by the declining ATR indicator) throughout the month of October. 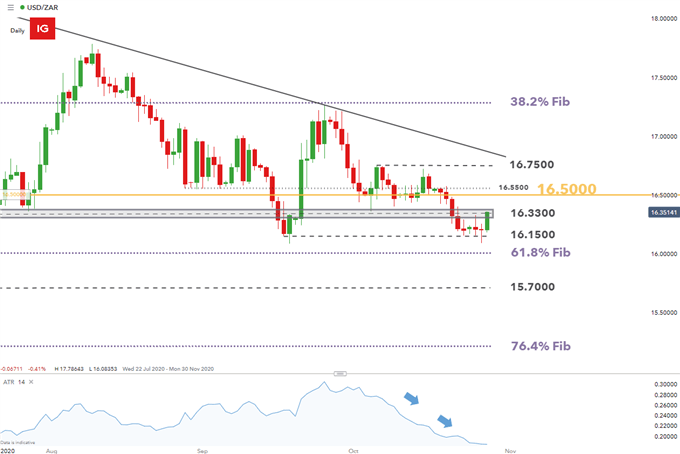 In anticipation of the mid-term budget speech, the USD/ZAR has moved up off the 16.1500 zone and looks to test the 16.3300 – 16.4400 zone. Increased volatility around the budget speech may cause choppy short term action but should the current daily momentum continue, the nearest level of resistance comes in at the crucial 16.5000 psychological level.

The mid-term budget policy speech has considerable market moving potential – learn how to trade around such market moving releases in our guide below: 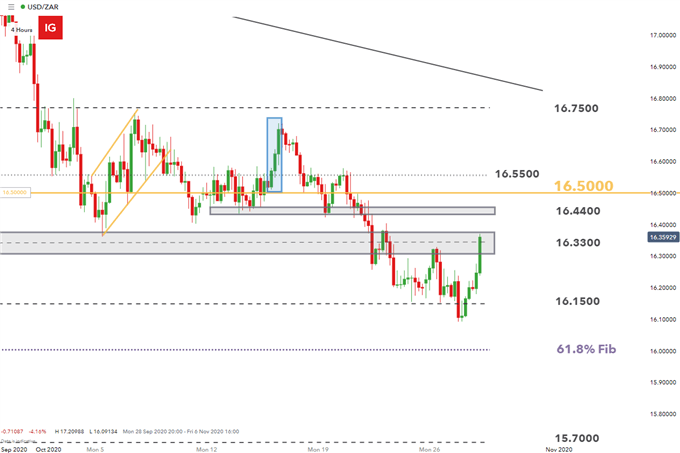 Inflation Falls to Lower Bound of the Target Range

CPI inflation dropped to its lowest level in three months as it prints at 3% for the month of September. The SA Reserve Bank maintains a target rate of between 3 and 6 percent. The reserve bank will need to look at ways to stimulate economic activity, either through lowering interest rates or through asset purchases, however a reduction in the interest rate may halt the Rand strength or even result in the Rand giving up recent gains vs the dollar.

Q3 unemployment figures have been delayed by Stats SA so be sure to monitor the DailyFX real-time news feed for further developments.