The Japanese Yen may continue to climb higher against its major counterparts in the coming days, as the Bank of Japan is expected to keep its monetary policy levers steady at its upcoming meeting on October 29.

The BoJ’s highly anticipated Quarterly Outlook Report is expected to show Japanese policymakers revising down their growth and inflation outlooks for 2020, with Prime Minister Yoshihide Suga’s newly introduced “Go to Travel” campaign – offering government’s subsidies for domestic travel – probably cited as one of the major hinderances on consumer price growth.

Consumer prices remained unchanged for the first time since late 2016 in September, while the core inflation rate came in at -0.3%.

Although the central bank has stated that it “will not hesitate to take additional easing measures if necessary”, recent economic and health developments suggest that the need for further monetary support may not be as intense as previously thought.

The number of new daily coronavirus infections has notably stabilized since peaking in early August, while the nation’s composite PMI is expected to show the economy is continuing to recover from the record contraction in output seen in April.

Therefore, the Japanese Yen may outperform its major counterparts in the near-term, if the nation’s current state of affairs encourages the BoJ to retain its wait-and-see approach to monetary policy.

Souring market sentiment could also put a premium on the haven-sensitive currency, as a record surge of Covid-19 infections forces governments across Europe to impose growth-hampering restrictions.

Italy has introduced its strictest restrictive measures since emerging from a nation-wide lockdown in May, while Spanish Prime Minister Pedro Sanchez announced a national curfew as the 7-day moving average of cases surges past 12,000.

French President Emmanuel Macron is expected to announce a month-long national lockdown at a televised address on Wednesday night, as France recorded 523 deaths on October 27 – the highest since April – and local health authorities declare that 58% of the nation’s intensive-care beds are taken up by coronavirus sufferers.

This staggering surge in cases may encourage investors to cut back on their exposure to risk-associated assets in the short-term and divert capital into ‘safe havens’.

Therefore, ongoing global coronavirus development may dictate the Japanese Yen’s trajectory, with rising cases necessitating the tightening of restrictions and in turn fueling the haven-associated currency’s rise against its major counterparts.

From a technical perspective, the path of least resistance for USD/JPY rates remains skewed to the downside, as price continues to track below all four moving averages and within the confines of a Descending Schiff Pitchfork.

The development of the RSI and MACD indicator are indicative of swelling bearish momentum, as both oscillators continue to travel firmly below their respective neutral midpoints.

With that in mind, a push to fresh monthly lows could be on the cards, with a daily close below the September low (104.00) needed to signal the resumption of the primary downtrend and bring the psychologically pivotal 103.00 mark into focus. 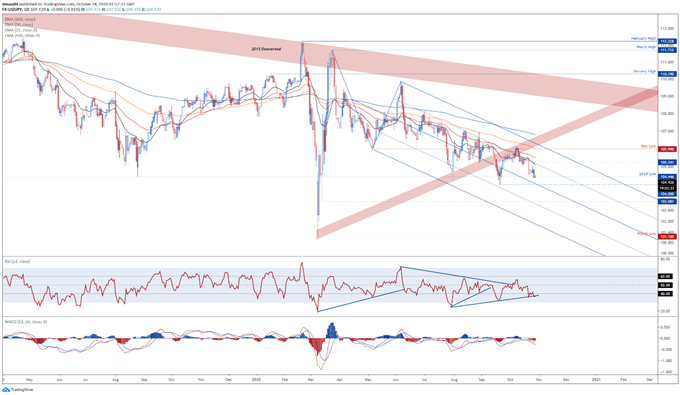 A bearish crossover on the MACD indicator, in tandem with the RSI dipping back towards oversold territory, could encourage would-be sellers and ultimately ignite a more extensive correction.

On the other hand, a break back above the 100-DMA (123.28) may generate a rebound towards the 124.00 mark however, given the fundamental backdrop, this seems to be a less probable scenario. 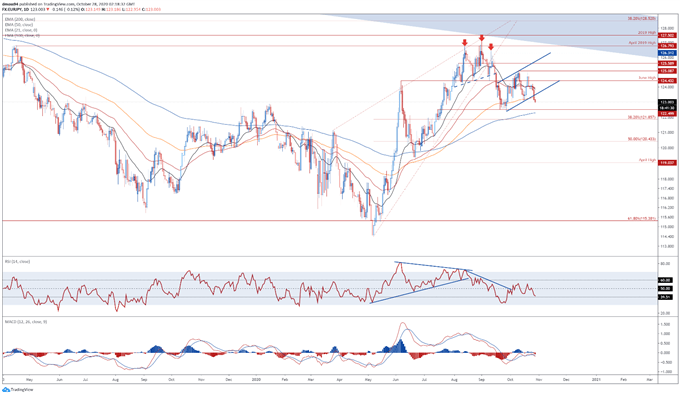