Dow Jones futures extend losses in early Asia trading hours after falling three days in a row. The downward momentum appeared to have gained traction amid a rapid rise in the number of new coronavirus cases in several major economies. Meanwhile, dwindling hopes for a US relief package to be inked before next week’s presidential election also weighed on sentiment. Even strong Microsoft earnings failed to lift investor confidence. Some 55 out of 62 S&P 500 index constituents, which released earnings on October 27th, have beaten analysts’ forecasts in terms of earning per share (EPS).

The US registered 74,323 new coronavirus cases on October 26th, marking a significant rebound from 59,691 seen a day before. Similarly, the number of new Covid-19 infections resurged in Germany and France on October 27th, at 11,409 and 33,417 respectively. Yet there appears to be lack of political willingness from the White House to impose stricter social distancing measures before the US election, rendering US equities vulnerable to further selloff should the virus situation worsen.

US daily increase of coronavirus cases 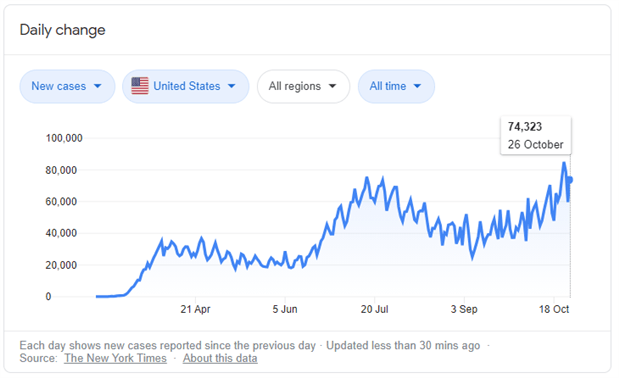 Crude oil prices traded lower at US$ 38.90 on Wednesday as a second viral wave may have a larger-than-expected impact on the energy demand outlook. Gold prices are consolidating at around US$ 1,905. Market sentiment tilted towards the downside, with the risk-linked Australian and New Zealand Dollars, and the Norwegian Krone among the worse performing G10 currencies on Wednesday open.

Chinese fintech giant Ant Financial, likely the world’s largest IPO ever, has received overwhelming demand from investors. The company was considering to close the book at 5pm SGT today, two days earlier than the original plan. Ant will be listed in Shanghai and Hong Kong simultaneously on November 5th.

On the macro front, Bank of Canada’s interest rate decision and EIA’s crude oil inventory data are among top events. Find out more on our economic calendar. 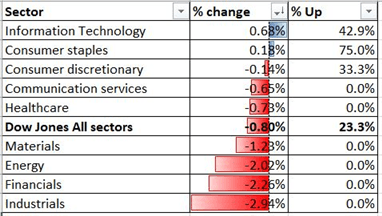 Technically, the Dow Jones index has decisively broken down the 100-Day Simple Moving Average (SMA) line at 27,550 and then the 61.8% Fibonacci retracement level at 27,490 with strong downward momentum. Breaking these key supports may have opened the room for more downside towards the next support levels at 27,140 (the 76.4% Fibonacci retracement).

The MACD indicator formed a “Death Cross” last week and prices have been trending lower since. This suggests that bearish momentum is dominating for now. The index price continued to press down its lower Bollinger Band, signaling strong selling pressure in the near term.

HSBC (+4.81%) and Tencent (+4.19%) were doing the heavy lifting to shed Hang Seng Index’s losses amid a broad selloff in other index constituents on Tuesday. The index may be susceptible to a temporary pullback amid souring sentiment in global markets. Ant Financials’ IPO has drawn a big crowd and may drain liquidity from the broader markets before the listing day. Given Ant’s huge size, the mega IPO may weigh on index’s performance in the near term.