Australian Dollar Capped By Resistance Ahead of Q3 Inflation Data

A significant easing of restrictions in Victoria looks likely in the coming days and may underpin the Australian Dollar against its major counterparts, as the nation’s second most populous state recorded zero new infections of coronavirus for the first time since June 9.

In fact, with the 14-day average of coronavirus cases across Melbourne falling to 3.6, and below the mandated threshold of 5, Premier Dan Andrews is expected to announce that retail and hospitality businesses can resume operations and reopen to customers from November 2. 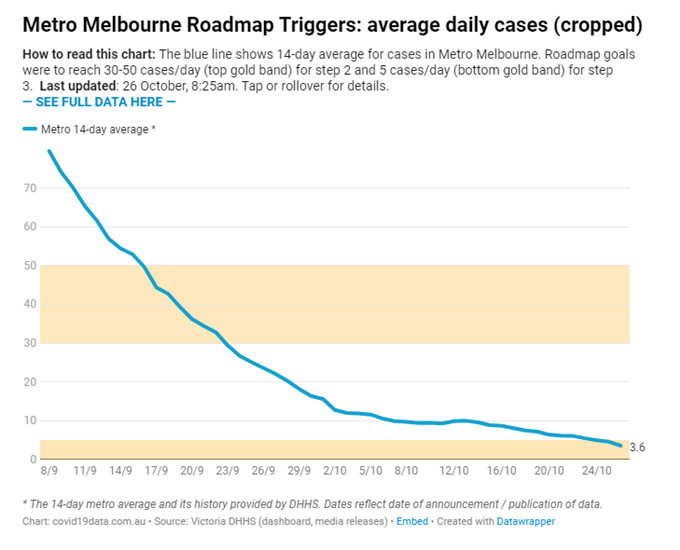 However, an outbreak in the city’s northern suburbs is threatening to delay the move to the next stage of Andrews’ proposed “reopening roadmap”, with the Premier stating that “I can’t speak to the scope of the opening until we get these test results back and we know exactly the enemy we’re facing, the challenge we’re facing”.

Nevertheless, with over 2,100 tests being processed from the northern suburbs in the last 24-hours and no new infections recorded, it seems relatively likely that Mr Andrews will ease restrictions on October 27.

If so, the Australian Dollar may continue to outperform its haven-linked counterparts in the near-term, should investors begin to bet on a more robust economic recovery.

The Reserve Bank of Australia’s dovish stance however, could limit the local currency’s gains as the central bank hints that further policy easing is on the table, stating in the minutes from its October meeting that “as the economy opens up, members considered it reasonable to expect that further monetary easing would gain more traction than had been the case earlier”.

This suggests that the loosening of restrictions in Victoria may prompt the RBA to provide additional monetary support given that “some parts of the transmission of easier monetary policy had been impaired as a result of the restrictions on activity”.

Moreover, Assistant Governor Christopher Kent’s statement that “it would not be unexpected for the Bank Bill Swap Rate (BBSW) to pop below zero” indicates that the central bank may not be as intolerant of negative interest rates as was once thought. 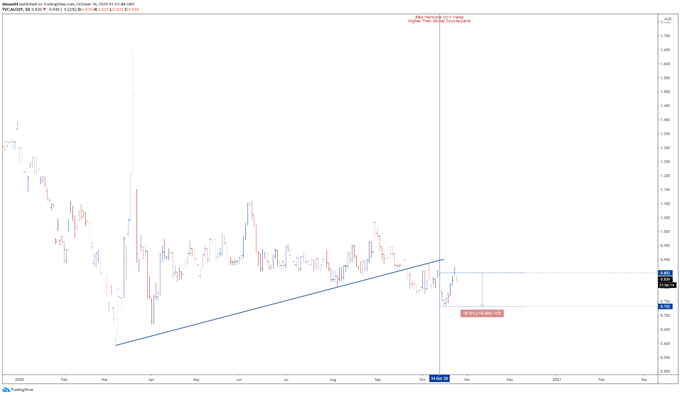 That being said, a cut into negative territory at this point seems relatively unlikely, with a 15 basis point cut to the Official Cash Rate (OCR) and 3-year yield target the more probable scenario alongside an asset purchasing program “buying government bonds further along the yield curve”.

Indeed, the market appears to have already priced in a cut to the OCR, with 1-year yields trading just below 0.1% and 3-year yields hovering at 0.14%.

Therefore, upcoming inflation data could buoy the Australian Dollar, with a higher than expected rise in consumer prices indicating that loose monetary policy conditions may not last for as long as expected, given that the RBA will consider tightening its settings when actual CPI is “sustainably in the 2 to 3 percent target range”.

Conversely, a disappointing print would probably lead to the marked discounting of the local currency and increase the likelihood of more significant support from the RBA in the coming months.

From a technical perspective, AUD/USD could be at risk of extending its decline from the yearly high (0.7413) set in September, as buyers struggle to push price back above key confluent resistance at the 61.8% Fibonacci (0.7131) and trend-defining 50-day moving average (0.7143).

With the RSI failing to snap above the downtrend extending from the September extremes and the MACD indicator tracking firmly below its neutral midpoint, the path of least resistance seems skewed to the downside.

However, price appears to be carving out a Symmetrical Triangle continuation pattern which implies that AUD/USD may consolidate within a tight range before eventually breaking to the topside, considering the preceding move was a significant uptrend.

To that end, if key support at the 0.70 mark holds firm an extended topside push could be on the cards, with a daily close above the October 23 high (0.7158) needed to validate the bullish continuation pattern and open the door for price to retest the yearly high (0.7413). 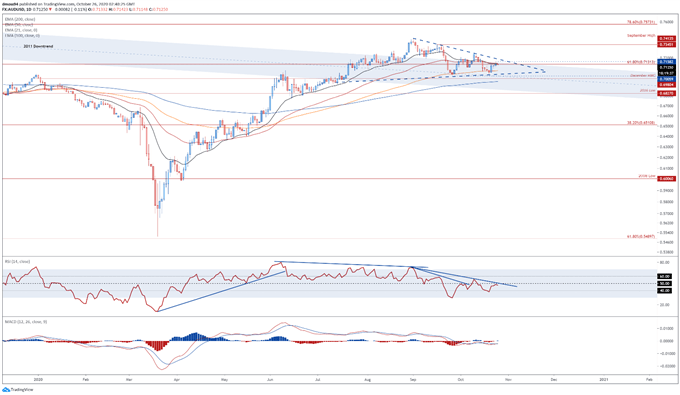 We typically take a contrarian view to crowd sentiment, and the fact traders are net-long suggests AUD/USD prices may continue to fall.

Positioning is less net-long than yesterday but more net-long from last week. The combination of current sentiment and recent changes gives us a further mixed AUD/USD trading bias. 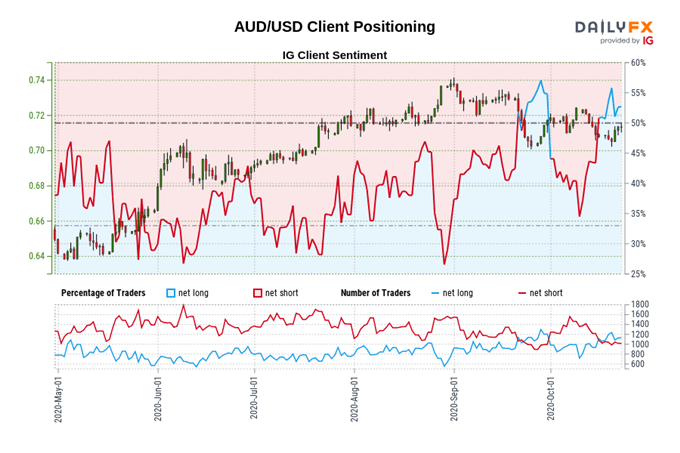