Wall Street futures extended gains during early Asia trading hours, in anticipation of progression in the US relief package after House Speaker Nancy Pelosi set a deadline to approve the stimulus proposal. Netflix’s big earnings miss appeared to have little impact on the overall market sentiment, while a majority of corporate America smashed consensus forecasts’ with upbeat Q3 results.

On the macro front, today’s release of UK and Canadian inflation data, alongside a speech by ECB President Christine Lagarde, will be closely watched by forex traders. The EIA will also report a string of crude oil inventory data that may set the tone for the energy sector. Read more on our economic calendar.

The US corporate earnings continued to fare well despite sporadic misses. On Tuesday, 15 out of 17 companies released better-than-expected earnings (table below), with the exception of Synchrony Financial and Netflix. Netflix’s Q3 results came sharply below forecasts in terms of earnings-per-share (EPS), new subscribers and forward guidance due to a drastic slowdown in sign-ups over the summer. Netflix’s share price to plunged more than 5% after market close. Nonetheless, the overall earnings picture remains upbeat, which may shelter stock markets against election and stimulus risks. 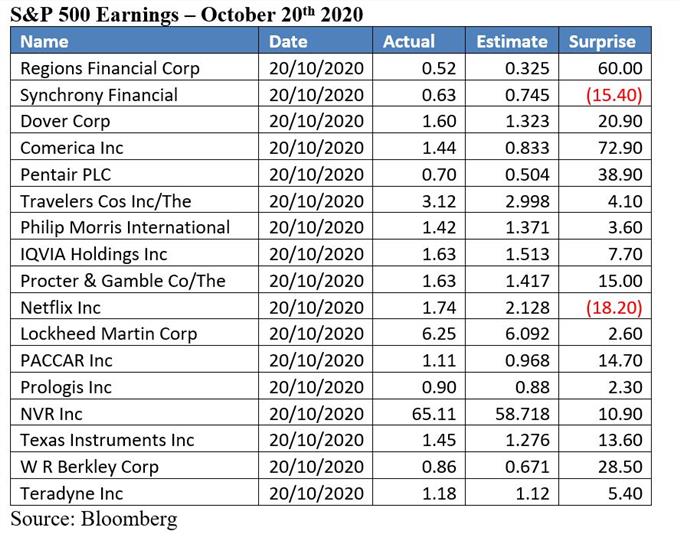 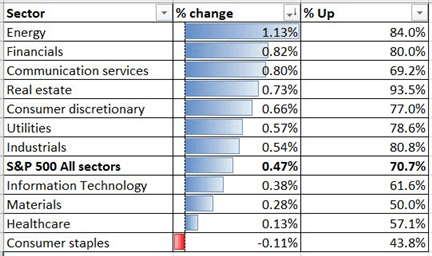 Technically, the Nasdaq 100 index appears to have entered a consolidative period after the formation of a bearish “AB=CD” pattern (chart below). The near-term trend has likely turned bearish as suggested by the formation of a “Death Cross” in the MACD indicator. An immediate support level can be found at 11,650, where the 38.2% Fibonacci retracement and the 20-Day Simple Moving Average (SMA) line overlap. Breaking below 11,650 may open room for more losses towards the next support level at 11,470 – the 50% Fibonacci retracement.

In the medium term, the recent pullback appears more like a technical correction, which may set the floor for higher highs. Both the 50- and 100-Day SMA lines remain upward-sloped, suggesting that the medium-term bull trend remains intact.

Japan’s Nikkei 225 index opened 0.22% higher at 23,610, as traders scrutinize the progress of a second US stimulus package. Strong US corporate earnings and stimulus hopes may set a positive tone for Asia-Pacific trading, while traders await inflation data from the UK and ECB President Lagarde’s speech later today.

Technically, the Nikkei 225 index has likely formed a “Rising Wedge” on its daily chart, with the 20-, 50- and 100-Day SMA lines all trending up steadily over the past few months. An immediate resistance level can be found at 24,000 – the previous high seen in mid-February 2020. The 20-Day SMA can be perceived as a dynamic moving support level.