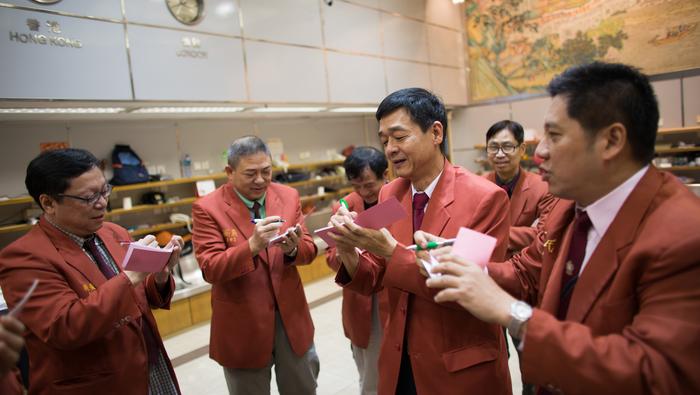 Wall Street equities registered decent gains on Monday, led by technology and financial sectors as investors awaited for this week’s big bank earnings. JP Morgan, Citigroup, Bank of America, Goldman Sachs and Wells Fargo are among the earliest to report their Q3 results. Earnings expectations have been revised up over the past three months, according to Factset reports. Consensus now see a decline of -20.5% YoY in S&P 500 earnings, versus the -25.3% forecast seen in June.

The VIX volatility index fell a fourth day to 28.0, and the US Dollar index declined to a three-week low. This suggests that positive sentiment is prevailing risk assets. Asia-Pacific markets opened broadly higher, led by mainland Chinese, Australian and Japanese shares.

A bearish “AB=CD” pattern has likely formed in the daily chart, suggesting that a technical pullback is possible as the price appears to have been temporarily overbought. If that happens, the Nasdaq 100 may consolidate before re-attempting its all-time high at 12,450.

The China A50 index (A50) registered its biggest gain in three months, rising 3.14% on Monday. The Shanghai and Shenzhen Composite both rallied on news that President Xi Jinping is paying a visit to the Greater Bay Area and will give a key speech in Shenzhen on Wednesday. He is expected to attend a ceremony along with Hong Kong leader Carrie Lam for the 40th anniversary of the special economic zone, strengthening the inter-connections within the Greater Bay Area and stressing Beijing’s commitment to reform and opening up.

Technically, the A50 has broken above the 38.2% Fibonacci retracement level (15,570) and thus has opened room for further upside. The next resistance levels can be found at 16,000 (23.6% Fibonacci retracement) and then 16,650 (the recent peak). An abrupt widening of the Bollinger Band points to a possible start of a bullish trend, after two months of consolidation.

Japan’s Nikkei 225 index has likely formed a ‘Rising Wedge’ in its daily chart (shown below), with an immediate resistance level found at around 23,740 (161.8% Fibonacci extension). Its near-term momentum remains bullish-biased, as the 20-, 50- and 10-Day Simple Moving Average (SMA) lines are all sloped upwards. An immediate support level can be found at 23,460 and then 23,300.