Stocks gapped higher at the open and never looked back to start the week with technology components leading the charge. Price action saw the Dow climb to its highest point since September 3, effectively eradicating a potential rising wedge formation. That said, stocks seemed to lack a direct catalyst behind the most recent leg higher, a potentially worrisome consideration ahead of a week filled with stock-specific insight slated for release.

That being said, the Dow Jones will have to negotiate a string of upcoming earnings which will begin with some of the country’s largest financial institutions. Two major Dow components, United Healthcare Group and Goldman Sachs, will report Tuesday morning alongside Bank of America, Wells Fargo and PNC Bank. They will be followed by United Airlines and Alcoa after the close. Morgan Stanley will follow on Thursday morning while next week will see hundreds of companies report each day.

While recent price action might suggest stocks have become detached from their fundamentals, the coming earnings season will provide an opportunity for traders and investors to gain insight into key themes. The pace of covid-recovery, the US-China trade war and potential sensitivities to the upcoming Presidential election are just three of the major themes that might be fleshed out in the upcoming reports.

Perhaps more importantly, earnings season will also provide insight on the underlying profitability and revenue expectations that make up the seemingly bulletproof US stock market. As it stands, data from FactSet suggests earnings are expected to decline by more than -20% in the third quarter even as the S&P 500 trades just a few percentage points from its all-time high. That said, second quarter earnings came in considerably above expectations as companies have shown an ability to beat their revised estimates. 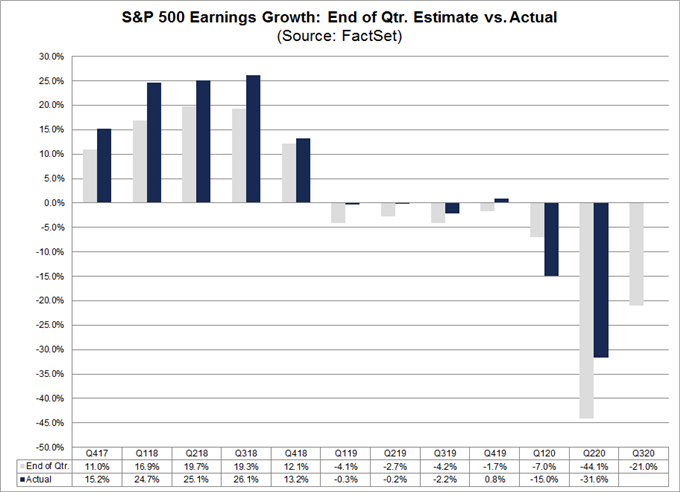 With earnings expectations being revised upward and price soaring alongside those revisions, it becomes a question of how much the market has priced in the coming reports. Should the broader performance beat expectations, will the market suffer a “buy the rumor, sell the news” fate? Or can a positive string of results fuel another leg higher? In the meantime, follow @PeterHanksFX on Twitter for updates and analysis.