S&P 500 Unphazed by Vice Presidential Debate - Who Won & What's Next?

Recommended by Dimitri Zabelin
How can trader positioning influence price trends?
Get My Guide

Harris pointed out, however, that their respective plan would not destroy jobs in that sector. On the issue of taxes, the Democratic running mate stressed that taxes for individuals making below $400,000 a year would not increase. As a consumption-driven economy, this news – from a market-oriented perspective – would likely be welcomed considering the dire economic circumstances.

As for trade, as I had written about in my prior report, Biden’s approach to cross-border sales – particularly as it relates to China – would likely involve a more confrontational approach. The friction from that – as we saw in 2018 – undermined global growth prospects. In the current virus-ridden environment, another trade conflict would threaten to derail an already-precarious recovery.

From that policy-based, market-oriented perspective, if polls show voters tilt more in favor of Kamala than Pence, it could boost market mood. Having said that, the major topic of discussion and arguably biggest market driver continues to be speculation about additional fiscal stimulus. Until a breakthrough is made there, investors will continue to be held hostage to a politically-volatile situation.

The next major event to look out for will be the second presidential debate on October 15. It will take place from 9:00-10:30 PM ET at the Adrienne Arsht Center for the Performing Arts of Miami-Dade County in Miami, Florida. The official schedule for what topics will be discussed has not yet been released and it is not yet clear if they will. This uncertainty may impact each candidate’s performance and ooze over into markets.

S&P 500 futures are now trading at their highest point since early September where the index was still experiencing an aggressive decline. The break above 3391.75 could signal the resumption of the of the prior uptrend, albeit at less-steep slope of appreciation. Beyond that, the next major obstacle to clear will be the prior all-time swing-high at around 3585.00. 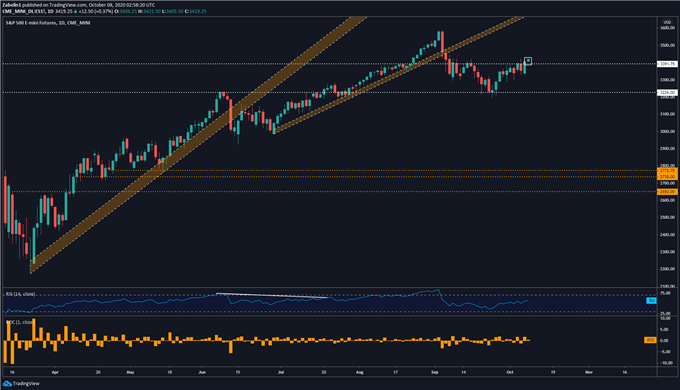