WTI crude oil prices (WTI) paused a three-day gain after President Trump called to end further fiscal stimulus negotiations - a deal that was perceived crucial to revitalize US household spending and government hiring. This happened against the backdrop of soft jobs data and manufacturing PMI readings lately, which showed early signs of a slowdown in growth momentum. A second viral wave may add more pressure on the energy demand outlook, which exhibits historic negative correlation to crude oil prices (chart below).

A string of crude oil inventory reports to be released by US Energy Information Administration (EIA) later today are important too. Markets foresee US crude oil stockpiles will rise by 0.4 million barrels this week, which will mark the first increase in four weeks. Implied crude oil demand has already weakened significantly in recent weeks. A further deviation between crude oil prices and implied demand data may prove to be a bearish catalyst. Read more on oureconomic calendar. 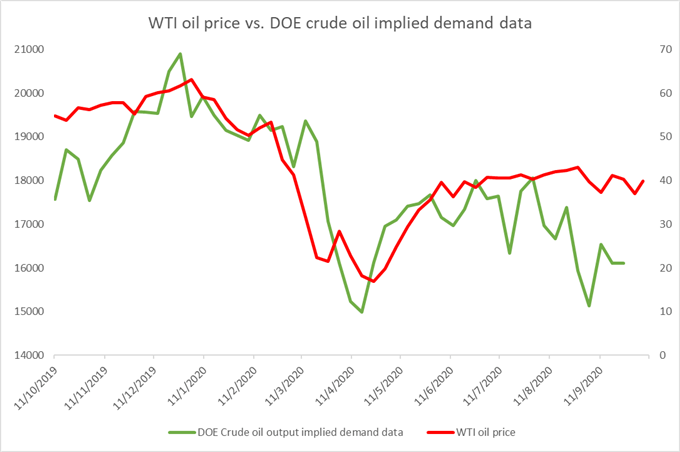 A strengthening US Dollar is also weighing on commodity prices. Their inverse correlation in the past 12 months can be visualized in the chart below. Amid rising uncertainties surrounding the US presidential election and fiscal stimulus package, haven demand may underpin US Dollar’s strength. 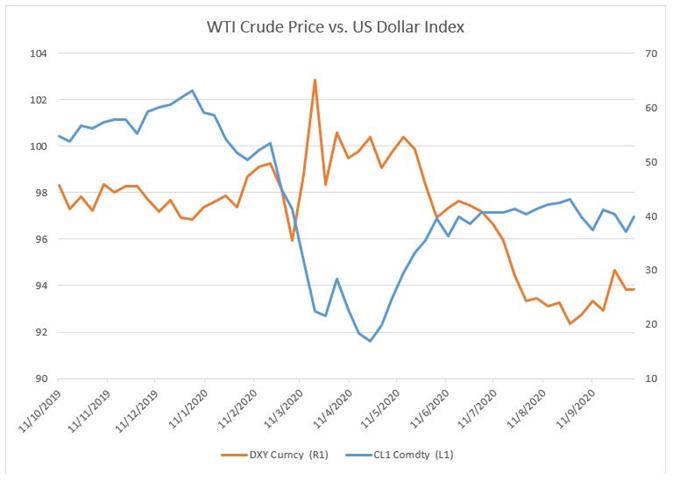 Technically, WTI crude oil price appears to have formed a bearish “Gartley 222” pattern in their daily chart. A long bearish “OA” leg seen in early September was followed by an “AB=CD” pattern, which may flag more downside risks. WTI is also facing a strong resistance level at US$ 40.70 – the 100-Day SMA line. A failure to break above the 100-Day line may pave way for further consolidations. A key support level can be found at US$ 36.4 – the 23.6% Fibonacci retracement.

Bollinger Band width has narrowed recently, suggesting that the price may have entered in to a period of consolidation within the upper and lower bounds of the indicator.