USD/ZAR this week has proved to be a tug of war between bulls and bears with neither coming out victorious just yet. Last week, the news about President Donald Trump and the First Lady testing positive for the coronavirus shocked global markets with an almost immediate risk-off reaction. Since then, markets have relaxed with risk aversion slowly dissipating to pre-announcement levels after President Trump left Walter Reed Medical Center.

Without much input from local South African markets or any major announcements of note, the Rand has remained resilient within the multi-month range between the 16.3444 and 17.4888 zones. 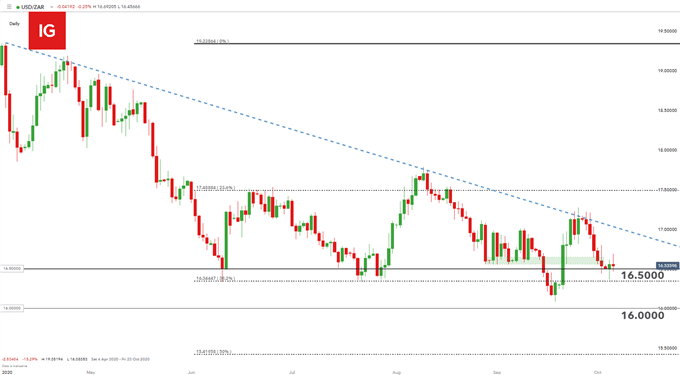 Price action on the daily chart shows USD/ZAR fluctuating around the 16.5000 psychological level. Price has broken below the prior support zone (green) last week and may see the Rand look for further appreciation against the US Dollar as mentioned in my Rand outlook last week.

Yesterday saw bears attempting to push toward the lower support bound of the multi-month range around 16.3444, which was succeeded by a swift reversion back to the 16.5000 zone. Yesterday’s long lower wick indicates price rejection around the 16.3444 support.

Keep up to date with price action setups!
Becoming a Better Trader in Current Markets
Register for webinar
Join now
Webinar has ended 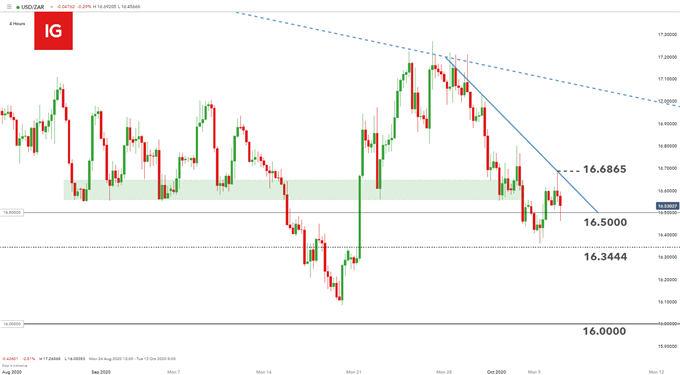 Focusing in on the 4-hour chart, a new diagonal resistance (blue) may be forming with an upper long wick candle presenting itself earlier today. This may be suggestive of further ZAR strength to come. A retest of this diagonal resistance (blue) may validate the trendline if price respects the level followed by a move back down. Alternatively, ZAR bulls may forgo a near-term retest and continue to push below the 16.5000 area of confluence toward 16.3444.

With indecision rampant within global markets at the moment, Emerging Market (EM) currencies are extremely vulnerable to changes in sentiment. Any unforeseen or irregular proceedings may cause investors to pull out of EM currencies such as the Rand. A bounce off 16.5000 and above the newly formed diagonal resistance may point toward further Rand depreciation.

Global markets have a keen eye cast on the upcoming US elections, which will likely increase market volatility as we approach the announcement of the Presidential election. This volatility could favor upside to the USD/ZAR pair as the USD could provide a safe-haven to risk-averse investors. As it stands, the Democratic contender Joe Biden is in the lead according to statistical polls.

Going into the election the US Dollar is the most short as it’s been in over a decade with a month away from the election. Historical data exhibits a reversion to a more neutral stance in USD as the time horizon shortens, which could result in a USD short squeeze (detrimental for the ZAR).

Additional fiscal stimulus could be on the horizon which would likely assist EM currencies. A win for Joe Biden may create an easier path toward a fiscal stimulus package.

Local news has recently shed light on multiple corruption battles (both past and present) that have finally resulted in some financial and legal consequences. This is positive news for South Africans and foreign investors alike as this could provide a boost to the country’s investor confidence going forward. Should the President remain steadfast in his outlook on corruption, USD/ZAR price action could continue moving toward pre-COVID levels.

South Africa has the highest number of COVID-19 cases in Africa. Although numbers have plateaued, the fact remains that the country could see future lockdown measures akin to Europe. However, as vaccine expectations rise, the Rand may be in for further strength should a vaccine be produced sooner rather than later, sparking risk-on flows.

The rest of the week will likely see key levels tested on USD/ZAR with probable catalysts stemming out of the US. Stimulus package negotiations out of the US could conclude before the Presidential election in November which could buoy investor optimism. Encouraging signs by the South African government in terms of corruption may have positive systemic effects regarding other structural and political challenges facing the nation.