Wall Street soared on Monday, erasing all losses incurred since President Trump tested positive for Covid-19 last week. The VIX volatility index fell alongside the US Dollar index, suggesting that investors’ confidence is improving. Market participants are probably pricing in a Biden-win scenario, as recent polls pointed to a wider gap between the two candidates after the first presidential debate.

At the moment, Joe Biden has likely secured 163 safe, 36 likely and 80 leaning votes, the sum of which has surpassed 270 – the threshold to win the election (chart below). On the other hand, President Trump has secured 71 safe, 29 likely and 25 leaning votes only. The rest 134 votes come from the ‘toss-up’ states, according to 270towin.com. Under a Biden-win scenario, a Democrat-led Congress will likely be able to push through an aggressive fiscal stimulus plan that may boost US household spending and government hiring. 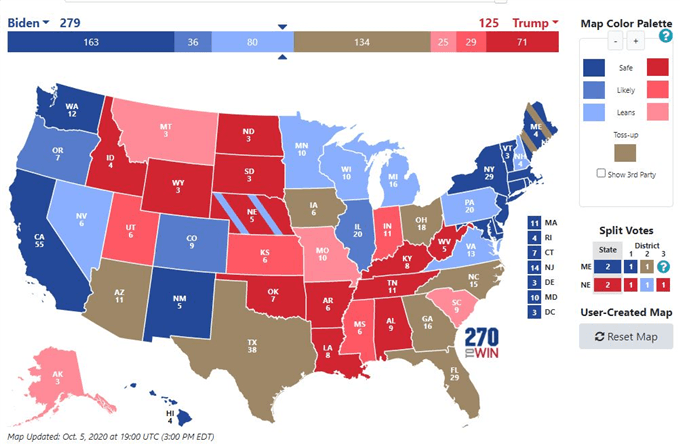 Asia-Pacific markets may follow US leads higher, as the futures market suggests. The RBA interest rate decision and Canada balance of trade are among the top market events today. Read more on our economic calendar. 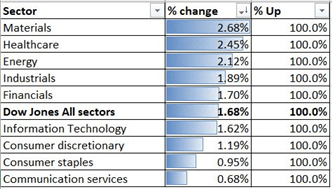 Technically,the Dow Jones has formed an “AB=CD” pattern through its consolidation phase and has since rebounded (chart below). It has also pierced through the 20-Day Simple Moving Average (SMA) line into the upper Bollinger Band, which might confirm a trend reversal (from bearish to bullish). Immediate resistance levels can be found at 28,360 and 28,500 (upper Bollinger line). The MACD indicator has also formed a bullish crossover, pointing to more upside potential.

Technically, the HSI has likely formed an “AB=CD” pattern recently and has since rebounded. A Fibonacci retracement (refer to chart below) highlights its possible path to recovery from the consolidation phase. Immediate resistance levels can be found at 23,935 (50% retracement), 24,260 (61.8%) and 24,447 (78.6%). The MACD indicator has formed a “golden cross”, which suggests more upside potential in the near term.