A positive tone in the markets continues to boost GBP/USD, which remains in the uptrend that began on September 23. However, significant resistance lies ahead from the 50-day moving average and from the cluster of highs around the psychologically important 1.30 level reached on September 16, 17 and 18.

That could prevent the uptrend from persisting near-term and further gains depend on a sustained break above 1.30 on a closing basis. Meanwhile headlines from the ongoing talks about the EU-UK relationship post Brexit have the potential to buffet Sterling in either direction. 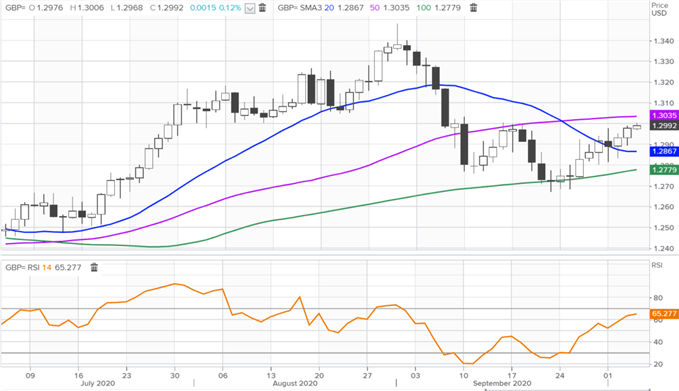 Source: Refinitive (You can click on it for a larger image)

For now, the markets generally are benefiting from an improved tone as US President Donald Trump returns to the White House from hospital and hopes rise that progress is being made on the stalled talks in the US on a fiscal package to offset the economic damage caused by the Covid-19 pandemic.

For GBP traders, however, the talks between the EU and the UK on their post-Brexit relationship have the potential to shift the currency in either direction near-term as UK Prime Minister Boris Johnson has set a deadline of October 15 to secure a deal as the two sides hold another nine days of intensified talks to finalize an agreement.

The odds remain in favour of a bare-bones deal but the PM’s flagship post-Brexit immigration Bill is struggling to make it through Parliament, with the House of Lords inflicting a series of defeats on the Government. Long term that is unimportant as the House of Commons can overturn any Lords decisions but it could still shift sentiment in Sterling either way in the next few days.