Wall Street had a turbulent trading session on Thursday with sentiment mixed. The Nasdaq surged 1.42%, while the S&P 500 and Dow Jones Industrial Average gained 0.53% and 0.13% respectively. Investors remained wary about a second US fiscal stimulus package, and rising coronavirus cases around the globe continued to weigh on risk sentiment. A 4% plunge in crude oil prices flagged demand risk as more countries are facing tough trade-offs between economic and virus situations. Energy was the worst performing sector on Thursday as a result.

A string of US data painted a mixed macroeconomic outlook, showing perhaps early signs of a slowdown in recovery. The September ISM Manufacturing PMI came inin at 55.4, lower than August’s reading of 56.4 and also missed economists’ 56.0 forecasts (see chart below). This was mainly due to softening new orders and production. Weekly jobless claims data came in at 837k, slightly lower compared to consensus forecast of 850k. Jobless claims data have registered below the closely-watched 1 million mark for five consecutive weeks.

Today’s non-farm payrolls report is among the top market events. Economists’ see some 850k non-farm jobs created in September, a significant decline from 1.37 million in August. The unemployment rate is expected to fall to 8.2% from 8.4% a month ago. Read more on our economic calendar. 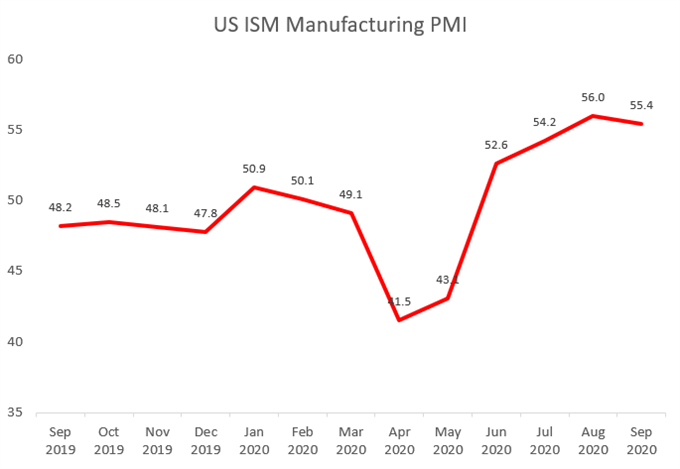 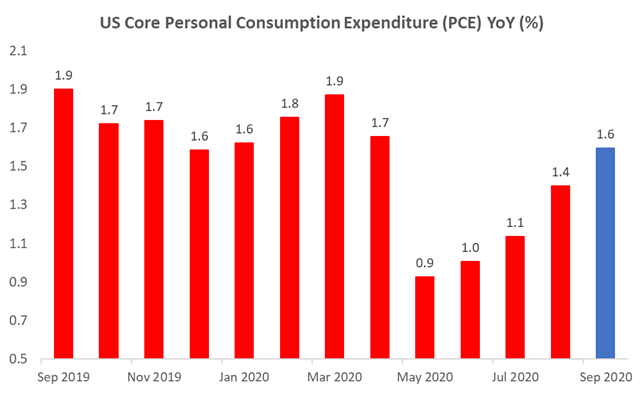 Asia-Pacific markets may follow US leads higher, as the futures market suggests. The Tokyo Stock Exchangehas resumed trading on Friday after shutting due to a glitch in its system to distribute market information. The Nikkei 225 index opened 0.58% higher. 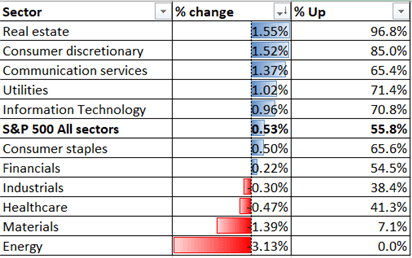 Technically, the Nasdaq 100 index has likely broken above its 20- and 50-Day Simple Moving Average (SMA) lines, penetrating into the upper Bollinger Band (chart below). The index may face some pressure at it approaches the upper Bollinger Band (11,650), which may serve as an immediate resistance. The MACD indicator has likely formed a bullish crossover, pointing to more upside potential.

Germany’s DAX 30 index was facing strong selling pressure after touching the 50-Day SMA at 12,920. An immediate support level can be found at around 12,730 – the 100-Day SMA. The near-term trend remains bearish-biased as the index failed to penetrate into the upper Bollinger Band, with the band width widening recently. The MACD indicator struggled to flip back into the positive territory too, flagging more downside risks.