The New Zealand Dollar is trading considerably lower so far this week with the September RBNZ monetary policy review on tap. NZD/USD price action has weakened by about 150-pips over the last two sessions, but rather than front-running potential dovishness from RBNZ officials, the Kiwi-Dollar’s decline looks largely driven by trader risk aversion as markets swoon.

The Reserve Bank of New Zealand is slated to release its interest rate decision this Wednesday, 23 September at 02:00 GMT, but the central bank is widely expected to leave rates unchanged. Currently, interest rate futures markets do not price in a full rate cut by the RBNZ until April next year. Also, after ramping the cap on its asset purchase program from NZD 60-billion to 100-billion last month, it is likely that the RBNZ stays sidelined at the September meeting and reiterates previous guidance. 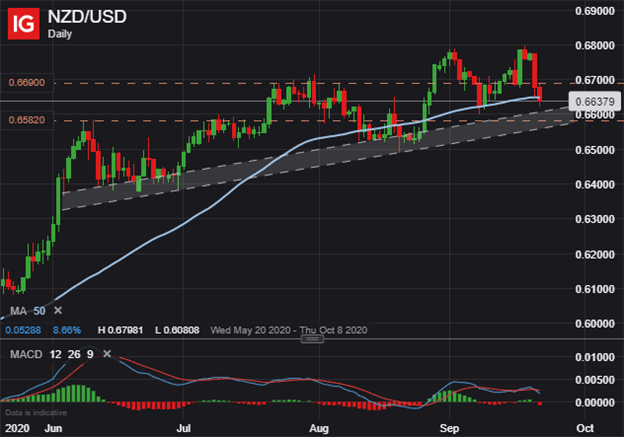 That said,spot NZD/USD looks set to close below its 50-day moving average and this opens up the door for potential follow-through lower toward rising channel support. The bearish MACD crossover also points to mounting downward pressure. If the RBNZ doubles-down on its jawboning efforts, the New Zealand Dollar could face renewed selling pressure. NZD/USD price action could also accelerate lower if the upcoming release of global PMI data from IHS Markit disappoints markets and fuels risk aversion further. 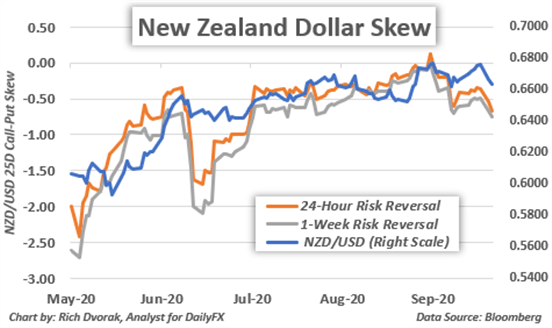 Not to mention, FX options traders have grown increasingly bearish toward NZD/USD over recent sessions. This is suggested by New Zealand Dollar call-put skew readings, or risk reversals, which are turning more negative. In fact, NZD/USD risk reversals for the overnight and one-week time frames were just clocked at their lowest levels since July.