RBNZ Monetary Policy Decision: What to Watch Out For

The RBNZ is expected to stand pat on monetary policy following last month’s action, whereby the central bank boosted its large scale asset purchase program (LSAPs) from NZD 60bln to NZD 100bln through to June 22. That said, while the RBNZ will likely maintain its dovish stance, the meeting is expected to be somewhat uneventful with broader macro risks the more dominant driver for the Kiwi in the short-term.

Since the August MPS, economic data has been slightly better relative to the RBNZ’s economic projections, most notably Q2 GDP, which printed at -12.2% against the RBNZ’s forecast of -14.3%. That said, while the sizeable drop was expected, as the NZ Finance Minister pointed out, the economy is also seen rebounding sharply in Q3, with activity data throughout July and August holding up relatively well, signalled by the improvement in the NZ Citi Surprise Index. That said, while the NZ Finance Minister may have sounded optimistic about the future outlook, the RBNZ are likely to remain cautious. 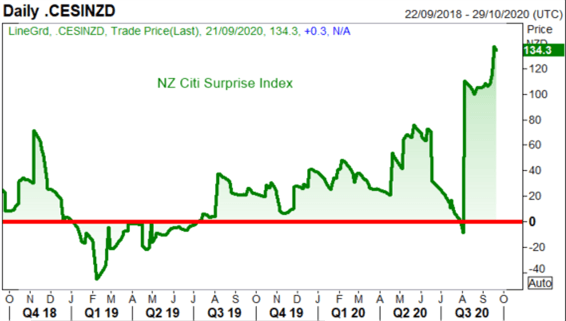 Elsewhere, the New Zealand Dollar Trade Weighted Index is hovering around the central bank’s assumption, as such, the RBNZ may not provide any fresh explicit commentary with regard to talking the Kiwi lower. As a reminder, RBNZ Governor Orr stated that he was not concerned about the exchange rate (NZD/USD had been trading at 0.6770), which in turn reduces the likelihood that the central bank will feel the need to alter its current forward guidance.

The RBNZ is expected to the keep the door open to negative rates, however, with the central bank stating that it will not change the OCR until March 21, the negative rate debate is a 2021 issue. The first point of call for a change in policy would likely center around LSAPs as noted by Assistant Governor Hawksby, that said, with an election next month, the RBNZ will keep the powder dry for now.

While the RBNZ monetary policy decision has bode well for doves in recent times with the NZD dropping 0.6-0.8% over the past three meetings. Given that the RBNZ Governor pointed out earlier this month that he is not concerned with the NZD, doves may be left disappointed by the central bank. That said, with the RBNZ seen maintaining current policy and guidance, market reaction is likely to be subdued with external factors the more dominant driver for the NZD in the short.

Most Dovish outcome would be a scenario where the central bank loosens its guidance that rates will be on hold until March 21, which would pressure the Kiwi as OIS markets currently pricing in an OCR of 5bps, however, this is not expected.

RBNZ Not Seen Going Negative Until At Least Late Q1 21