WTI crude oil prices (WTI) registered their largest single-day decline in two weeks, falling as much as 6% before pairing some losses and closing 4% lower. A resurgence of coronavirus cases and a potential lockdown in part of the EU is weighing energy demand outlook, overshadowing a fragile economic recovery. US Dollar’s strengthening put more pressure on commodity prices, with gold and silver falling alongside crude oil prices.

Meanwhile, a pending US fiscal stimulus package dwindled hopes for more spending in the near term. However, the approval of the spending bill will likely give energy prices a boost when it is eventually inked.

An online meeting held by OPEC+ members last Thursday didn’t reveal a solid production cut plan, but it raised hopes that the committee will closely monitor the outlook for demand and may deepen production cuts when necessary. Recently, IEA and OPEC have both trimmed their outlook for crude oil demand this year.

IG Client Sentiment indicates that sentiment is mixed among oil traders, with 60% of the position net long, while 40% are net short. As oil prices fell, traders trimmed some short positions while adding some long positions overnight. Compared to a week ago, however, traders are still building up short bets while cutting long positions. 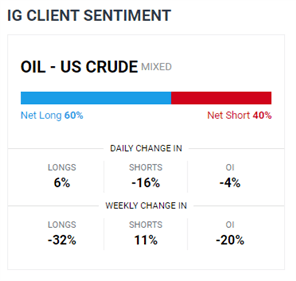 Volatility in crude oil prices has spiked, with the width of the Bollinger Band widening in the past two weeks (chart below). WTI is testing its 20-Day Simple Moving Average (SMA) line at US$ 39.6. A price reversal back below the middle Bollinger Band (also a 20-Day SMA) may flag more downward risk in the short term.