The provision of extraordinary fiscal and monetary stimulus measures in response to the novel coronavirus pandemic has served to underpin anti-fiat assets, with the price of Bitcoin surging over 212% from the yearly low (4000) to fall just shy of key resistance at the 2019 high (13764).

However, a resurgence of risk-aversion in recent days, on the back of escalating US-China tensions and worrisome vaccine news, has notably weighed on the popular cryptocurrency and ignited a rather significant retreat from its highest levels since July 2019 (12490).

AstraZeneca, one of the frontrunners in the race to find an effective Covid-19 vaccine, suspended “Phase 3” trials temporarily after a “standard review process triggered a pause to vaccination to allow review of safety data”.

Nevertheless, with the Federal Reserve’s adoption of average inflation targeting (AIT) and Congress continuing to mull the provision of an additional fiscal stimulus package to build “on what worked in the CARES Act”, the fundamental backdrop driving the price of Bitcoin higher looks set to endure.

To that end, the recent 26% decline from the yearly high could prove to be nothing more than a short-term pullback, with psychological support at the $10,000 level potentially providing a platform for price to resume its primary uptrend. 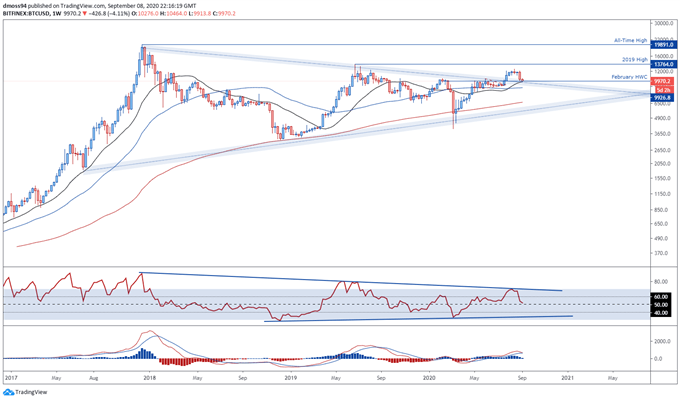 From a technical perspective, Bitcoin’s 4-week pullback from the yearly high set in mid-August (12490) may have validated the topside break of the Symmetrical Triangle pattern carved out over the last three years, if key support at the February high weekly close (9926.8) remains intact.

Although the RSI has markedly dipped lower in recent weeks it has continued to travel above its neutral midpoint, which could be indicative of fading bearish momentum and possibly encourage would-be buyers if price closes the week above the psychologically pivotal $10,000 level.

However, a bearish cross-over on the MACD indicator could inspire selling pressure if BTC collapses back below confluent support at the 2017 downtrend and February HWC (9926.8), potentially carving a path back towards the trend-defining 50-week moving average (8790).

Having said that, the path of least resistance looks to be higher should BTC remain constructively perched above key psychological support, with a weekly close back above the $12,000 level probably needed to signal a resumption of the primary uptrend. 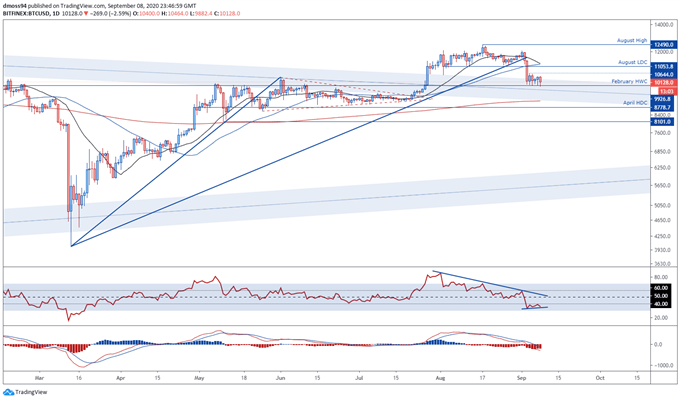 Zooming into the daily chart unveils a rather uncertain near-term outlook however, as price carves out a possible Bear Flag pattern atop pivotal psychological support and the ‘faster’ 21-day moving average begins to cross below its ‘slower’ 50-period counterpart.

A daily close below flag support and the midpoint of the 2017 downtrend could validate the bearish continuation pattern, with the implied measured move suggesting that BTC/USD could slice through the sentiment-defining 200-DMA (9087) to test the May low (8101).

That being said, bearish RSI divergence indicates that the 3-week slide from the August high (12490) may be running out steam.

Therefore, a continuation of the primary uptrend looks in the offing if buyers can successfully overcome resistance at the September 4 swing-high (10644).

A daily close above the August low daily close (11053.8) probably generating an impulsive surge to retest the yearly high (12490).