South African President, Cyril Ramaphosa, addressed concerns around the recent allegations of Covid-related corruption within the ruling ANC party in an open letter where he addressed the liberation movement as “Accused number one”.

Companies with connections to high-ranking government officials and senior members of the ANC have been awarded lucrative contracts to provide essential personal protective equipment (PPE) and related supplies. This was one of the issues discussed at the party’s National Executive Committee meeting where it was recommended that members charged with corruption must step aside from official positions, according to reports. 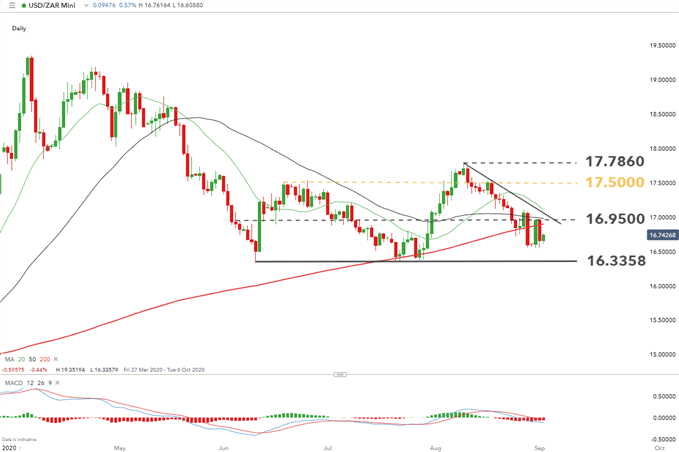 The South African Rand (ZAR) has experienced a decent run of strength versus the US dollar despite periods of increased volatility in the last four trading sessions. Price currently trades below the 200 day simple moving average – hinting that Rand strength may persist - while the moving average convergence divergence (MACD) indicator has not yet indicated any clear signs of a reversal. The 16.3358 remains the next level of support should the trend continue lower.

If we are to see a reversal in the US dollar, the immediate level of resistance remains at 16.9500 before the psychologically important level of 17.5000 becomes pertinent. Further bullish momentum would see the recent swing high at 17.786 become resistance.

August was a disappointing month for the wider benchmark, the JSE All Share Index, dropping 2.8% as sentiment was negatively impacted by turmoil that party in-fighting could prompt a cabinet reshuffle.

Concerning the JSE Top 40, large-cap resource shares and major index constituents such as Naspers (-1.7% MoM) and British American Tobacco (-0.8% MoM), saw their share prices fall. Resource shares dipped slightly as precious metal prices declined from the all-time high, however Prosus, an index heavy weight, managed to trade around 3.1% up for the month.

After holding the support zone around 51150, the index made a bullish move (highlighted as the blue oval) where price action trades around opening levels as witnessed by the doji candle. Further upward momentum brings the area of confluence (horizontal resistance at 53400 and the upsloping trendline) into play with a move above that bringing the 53792 level into focus.

A break below the zone of support (blue rectangle) however, highlights the most immediate level of support at 50360 which may indicate the start of a trend reversal 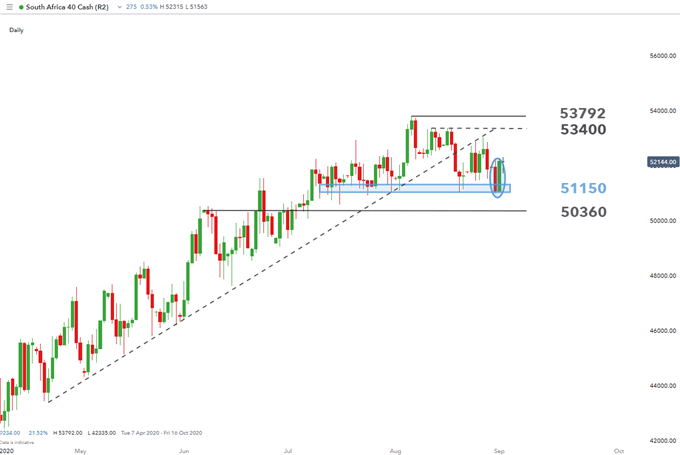 Economic data out later this week may add further to volatility in USD/ZAR should there be any significant surprises in the figures.