Japanese stocks took a dive on Friday afternoon following PM Shinzo Abe’s surprising announcement of his resignation, due to ill health reasons. PM Abe is Japan’s longest servicing prime minister in recent years, and he pushed through massive monetary and fiscal stimulus together with BOJ Governor Kuroda Haruhiko since 2012, leading to a nearly three-fold rally in the Nikkei 225 stock index over the past eight years.

Abe’s departure led to knee-jerk reactions in the financial markets. The Japanese Yen strengthened more than 1% against the Greenback on Friday and remained at relatively strong levels until this morning. Japanese stocks, however, may shrug off the negative impact and move higher alongside other Asia-Pacific markets.

According to various analysis and forecasts obtained by market experts, there is likely to be a large degree of continuity within the ruling party and the BOJ’s accommodative monetary policy under a new prime minister. This assumption may help to lift market confidence, despite of rising political uncertainty with regards to Japan’s foreign policy, and especially its relationship with Beijing.

China NBS manufacturing PMI came in at 51.0, missing a forecast of 51.2. AUD/USD fell slightly after the release of the data before erasing some losses. The service PMI reading, however, has smashed forecasts from the upside, registering its highest reading seen since January 2018 at 55.2. The mixed data offering suggests that the road to recovery remains bumpy, but the emerging of a service-driven ‘new economy’ might cushion some downside.

This week, the RBA rate decision (Tue) as well as US ISM manufacturing PMI data (Tue), Australian GDP (Wed), US services ISM (Thur) and US Non-farm payroll (Fri) data are among the key events to watch out for. 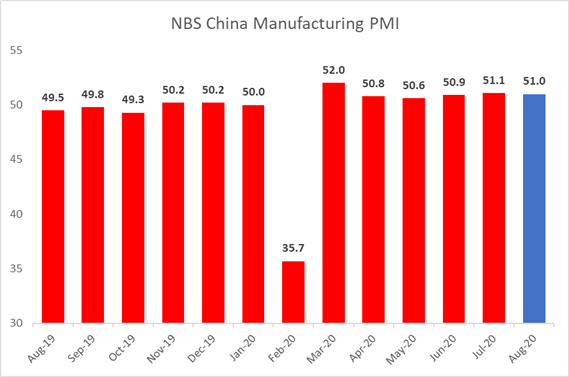 Technically, the Nikkei 225 index is facing a strong resistance level at 23,300, which is coincident with the announcement of PM Abe’s surprising resignation. Its overall trend, however, remains bullish as the simple moving average lines are sloping upwards. Breaking above the key resistance at 23,300 will likely open room for more upside towards the next resistance at 24,000 – a pre-Covid high.

Hong Kong’s Hang Seng index may open higher today following strong leads from the US trading session. Technically, its momentum is biased more towards the upside as the MACD indicator has formed a ‘golden cross’ and trended higher. The index is set to challenge a key resistance level at 25,500 – which is the upper bound of an “ascending triangle’ formed in recent weeks (chart below). Breaking out above this level will likely open room for more upside towards the 25,860 – the 61.8% Fibonacci retracement.

Australia’s ASX 200 index stock benchmark may open higher alongside the rest of Asia-Pacific markets. Technically, it has found strong support at 6,000 and has since rebounded. The index was mostly ranging within an ‘ascending triangle’ in the past two months, waiting for fresh catalysts to fuel a meaningful breakthrough past key resistance at 6,200.