With the end of August fast-approaching, long-term investors will be intently watching how the Japanese Yen closes out the month, as cycle analysis suggests the haven-associated currency could substantially underperform its major counterparts over the next 6-9 months.

As noted in previous reports, the Yen largely adheres to what appears to be an 8-year rotation, with significant bottoms in the JPY index set in late 1998, early 2007 and late 2015.

After bottoming out against its major counterparts, JPY then seems to outperform early in the cycle with key highs set roughly two years after the 1998 and 2007 lows.

Although the Japanese Yen soared to its current cyclical high only 13 months after the start of the period, this looks to have mirrored the price action seen in the second-half of the 1990-98 and 2007-2015 cycles. In the latter scenario, it rose to set a secondary high just under 6 years after the low set in 2015.

With that in mind, the monthly close below trend support extending from the 2015 low - combined with the RSI snapping its 73-month uptrend - could be indicative of a cyclical downturn for JPY, with cycle analysis suggesting JPY could fall as much as 30% from current levels before bottoming out in 2024. 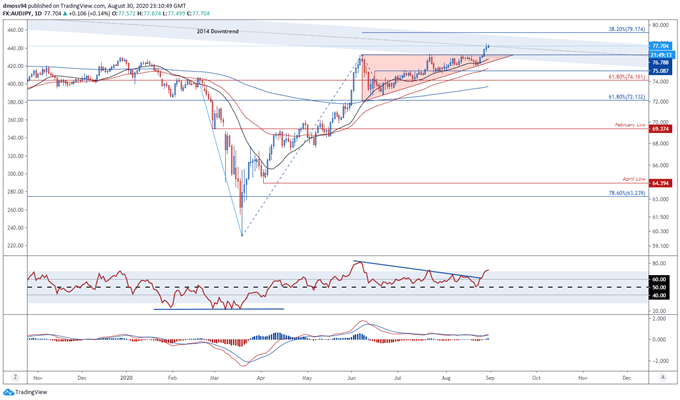 The impulsive surge through Ascending Triangle resistance on August 27 signals that an extended topside move may be on the cards for AUD/JPY rates, as the RSI snaps its 12-week downtrend and the MACD crosses above its ‘slower’ signal line.

That being said, a near-term pullback could eventuate as price runs into confluent resistance at the midpoint of the 2014 downtrend and psychologically pivotal 78 level, with former resistance-turned-support at the July high (76.87) probably limiting the potential decline.

If key support remains intact the path of least resistance appears higher for AUD/JPY, with the implied measured move suggesting price may climb above the upper bounds of the 2014 downtrend and the 38.2% Fibonacci (79.17) to test the 81.00 mark. 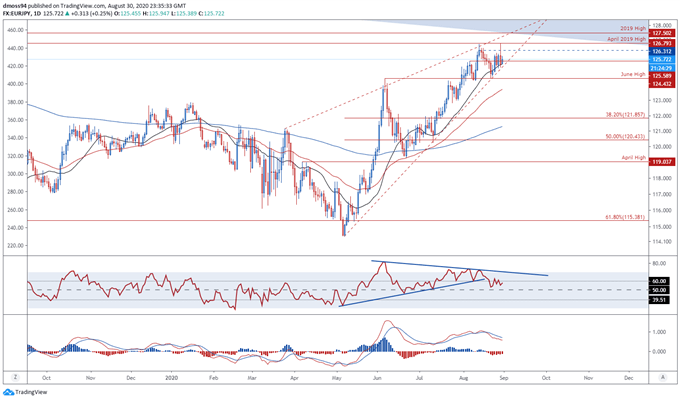 Significant RSI divergence suggests that EUR/JPY’s 10.8% surge from the May low (114.39) could be running out of steam and is at risk of reversing lower as price carves out a bearish Rising Wedge pattern.

However, price is still constructively perched above the 21-day moving average (125.39) and 125 level, whilst the RSI and MACD indicators continue to track in positive territory.

Therefore, a retest of the April 2019 high (126.79) could eventuate in the coming days if rising wedge support remains intact.

Conversely, a break back below the 21-DMA (125.39) would probably intensify selling pressure and could see price dive back to support at the June high (125.59)