In the early hours of Friday morning, Japanese Flash Manufacturing PMI data came in at 46.6, slightly better than the estimated figure of 45. Crucially however, the higher figure remains below 50 which suggests that Japanese purchasing managers, on average, consider the industry to still be in a contractionary phase.

Why is PMI data viewed as an important leading indicator for an economy? Read How Forex Traders Use ISM/PMI Data

After worse than expected jobless claims yesterday, market participants turn their focus to the US Marketing Flash PMI later today. Current consensus is 51.9 which could mark the second straight month above 50 should expectations hold.

Chart of US Manufacturing PMI Ahead of the Data Release (Monthly)

Price action has built on bearish momentum which has seen the pair trade lower over the past 2 days while trading back within the zones of support and resistance shown by the blue rectangles. More recently however, after approaching the zone of support around 105.35 – 105.40, the global reserve currency looks to have resisted a move lower on the back of what appears to be short term dollar strength (vs G10 currencies)

In the event of a stronger dollar, USD bulls may consider a break and close above the 105.72 as the initial hurdle before bringing into play the 106.15 – 106.24 zone of resistance.

If the demand for Japanese Yen continues at the expense of the dollar, USD/JPY bears may consider a break and close below the 105.35 – 105.40 zone as the litmus test for continued lower prices. Should this transpire, the next level of support becomes 105.20 followed closely by the 104.96 level. 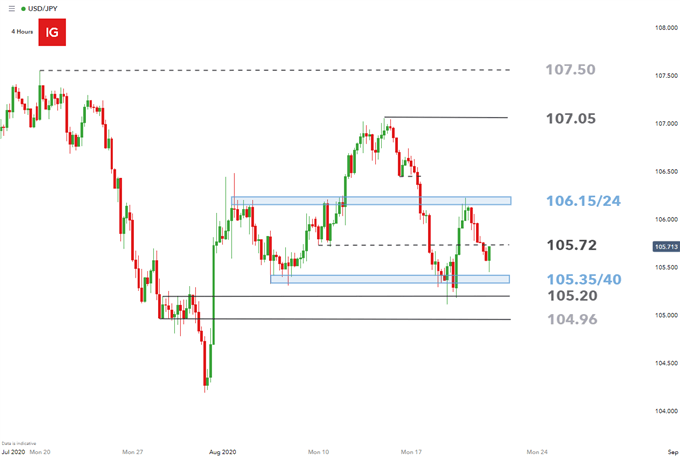 Recommended by Richard Snow
What’s next for the Yen? See our quarterly forecast
Get My Guide

At the time of writing, USD/JPY retail trader data shows 53.21% of traders are net-long with the ratio of traders long to short at 1.14 to 1. 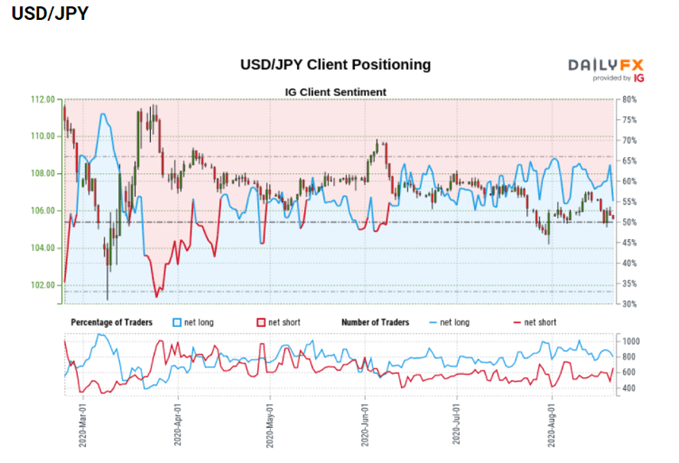