NZD/USD Outlook: Can Bulls Maintain Control Ahead of RBNZ Decision?

Although New Zealand’s economy has had a better than expected recovery following the coronavirus pandemic, markets have continued to price in dovish expectations ahead of the RBNZ interest rate decision (Reserve Bank of New Zealand), which will be held at 2am (GMT) tomorrow, followed by Governor Adrian Orr’s press conference at 3am (GMT), the details of which can be found on the DailyFX economic calendar. While interest rates are expected to remain at current levels, the possibility of additional quantitative easing, following Prime Minister Arden’s announcement that Auckland will be moving to level 3 restrictions, is an additional variance of concern, which may provide extra pressure for the NZD, which continues to lag the likes of AUD and the Euro.

On the contrary, the USD has recovered slightly amid better than expected NFP results, producing a certain level of optimism for the greenback.

Recommended by Tammy Da Costa
Can you plan for major news events?
Get My Guide

From a technical perspective, Fibonacci retracement levels continue to hold bulls at bay, at least until the RBNZ decision tomorrow.

The monthly chart below highlights Fibonacci levels from three major moves. The first Fibonacci retracement (pink) represents the major move from the November 2000 low to the July 2014 high. The secondary move (blue), is plotted between the March 2009 low to the July 2014 high, while the third Fibonacci retracement (purple) represents the short-term move, from August 2017 high to March 2020 low. 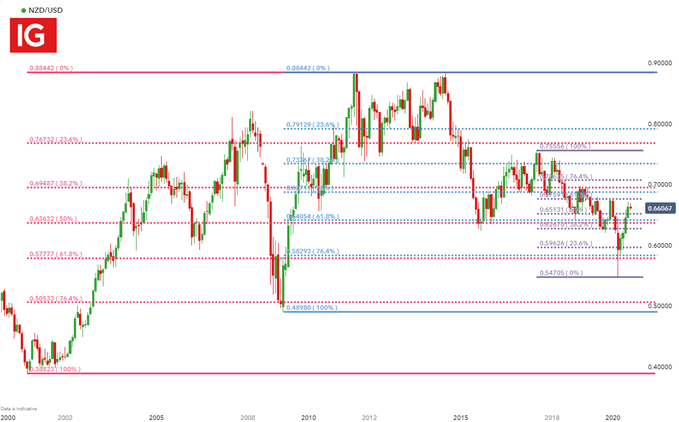 Although price action has favored the bulls since the NZD recovered from March 2020 lows, Fibonacci levels continue to provide strong levels of both support and resistance.

MACD Remains Above the Zero-Line

In the daily chart below, the Moving Average Convergence/Divergence (MACD) indicator, which helps to measure both the momentum and the direction of the trend, remains above the zero-line, but, despite the price chart reflecting higher highs, the MACD indicates the presence of divergence, suggesting that the momentum of the upward trend may be diminishing with the possibility of a reversal in the trend. 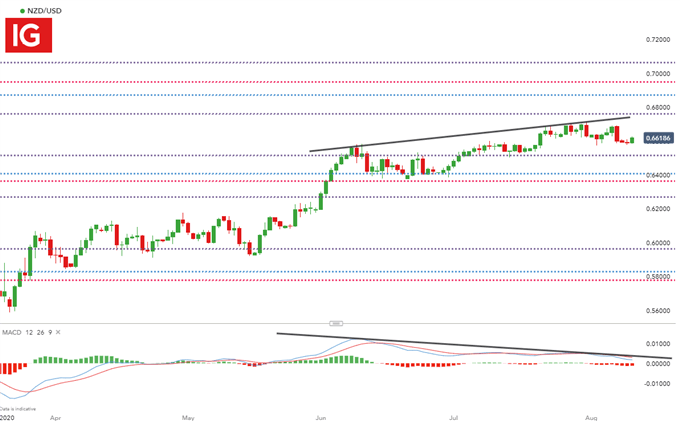 Learn how to identify trends with trader sentiment
What Do Other Traders' Buy/Sell Bets Say About Price Trends?
Register for webinar
Join now
Webinar has ended

According to client sentiment, at the time of writing, majority of retail traders are showing a bearish bias towards NZD/USD, with 56% of traders holding short positions. We typically take a contrarian view to crowd sentiment, and the fact traders are net-short suggests that prices may continue to increase following a lack of action from tomorrow’s meeting.