The S&P 500 index stock benchmark ended the month of July with a 4% gain – its best monthly performance since April. Upbeat earnings from the major US technology firms - Apple, Amazon, Facebook and Alphabet - boosted market sentiment, sending the technology sector 2.37% higher on Friday. Now, investors and traders are probably looking at probably what’s next to support the rally of the US stock benchmark after its astonishing 49% gain from the trough seen in March.

Headwinds seems to be around the corner - rating agency Fitch has revised the credit outlook of the United States to negative from stable, citing “the ongoing deterioration in US public finance and the absence of a credible fiscal consolidation plan”. This may serve to boost demand for precious metals as it highlights credit risk against the backdrop of booming debt levels.

Sector-wise, information technology (+2.37%), consumer discretionary (+2.36%) and communication services (+1.15%) were doing the heavy lifting. However, less than half of the companies ended higher in even those best-performing sectors. This suggests the rally was perhaps lifted by a few big companies, whereas the vast majority have probably run out of steam. 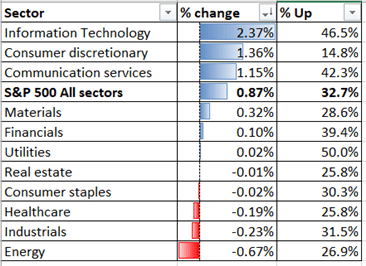 Technically, the S&P 500 index has reached a minor resistance at 3,270 – the previous high seen on 23rd July. Failing to break this level would probably result in a pullback towards support at 3,180– the 161.8% Fibonacci extension. The overall trend remains bullish as suggested by the 20-, 50- and 100-Day Simple Moving Averages (SMAs). The 200% Fibonacci extension level – at 3,358 – is a major resistance ahead.

Japan’s Nikkei 225 index stock benchmark fell sharply on Friday as more than 400 new Covid-19 cases were reported in Tokyo. Virus concerns are undermining market sentiment, and are likely to remain the theme in the near term.

Technically, Nikkei 225 has fallen to a key support level at 21,900 after two months of consolidation. Breaking below this level would probably open room for more downside towards its 100-Day SMA at 21,400, and then a key Fibonacci support at 20,700.

Hong Kong’s Hang Seng Index stock benchmark (HSI) extended its consolidation last week, testing its 100-Day SMA at 24,400. The index was adversely hurt by rising Covid-19 infections, a deep economic contraction and rising US-China tensions. This rendered Hang Seng one of the worst performing stock benchmark across the Asia-Pacific region. The outlook remains cloudy as there seems to be no quick solution to the above-mentioned topics.

In Shanghai, the stock markets have likely stabilized after a deep correction in July. Outstanding balance on Chinese margin trading has climbed to its highest level seen in more than a year (chart below), suggesting that investors are still in a ‘risk on’ mood. The margin trading balance has shown strong positive correlation with the Shanghai Composite. 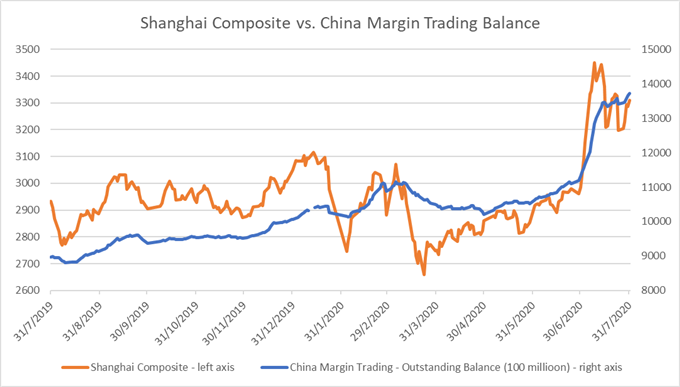 Technically, Hang Seng is finding support at 24,400, breaking which will probably open room to more downside towards the 61.8% Fibonacci retracement at 24,130. The overall trend remains bearish in the near term.