Upcoming employment and inflation data could buoy the risk-sensitive NZD ahead of the Reserve Bank of New Zealand’s interest rate decision on August 12.

With the central bank adapting their monetary policy levers to “maintain price stability and support maximum sustainable employment”, this week’s economic data may define the RBNZ’s short to medium-term outlook and could result in the adoption of a wait-and-see approach, mirroring the actions of their trans-Tasman counterparts at the Reserve Bank of Australia.

From a technical perspective, the New Zealand Dollar looks to be gearing up for a sustained push to the upside against its US counterpart, as price bursts through the 2014 downtrend and the RSI breaks above its midpoint for the first time in over two years.

Recent price action is strikingly similar to that seen between September 1996 and August 2002, with NZD confined by the 1996 downtrend for over 5 years before a topside break of resistance seemingly initiated a 110% surge to set the 2008 high, roughly 6 and a half years later.

The RSI reinforces this similarity as the oscillator fails to follow price to lower lows, mirroring what occurred in late 2000 with the New Zealand Dollar setting a key bottom after falling over 45% from the high set in November 1996 (0.7176).

With that in mind, the risk-sensitive currency could be poised to drastically extend it’s recent 4-month climb from the yearly low (0.5469), with cycle analysis suggesting the NZD/USD exchange rate could climb back above the psychologically pivotal 0.70 mark in the coming months.

Zooming into a daily timeframe suggests the NZD/USD exchange rate could dip back to support at the June high (0.6584), as the RSI flops just shy of overbought territory and fails to follow price to higher highs.

However, the medium-term outlook for the risk-sensitive currency remains skewed to the upside, as price continues to track the uptrend extending from the March low (0.5470) and the 50-day moving average (0.6390) notably steepens after crossing above its ‘slower’ 200-period counterpart (0.6380).

Conversely, a break below uptrend support and the 38.2% Fibonacci (0.6550) could invigorate sellers and potentially open up a path to retest support at the sentiment-defining 200-MA (0.6830). 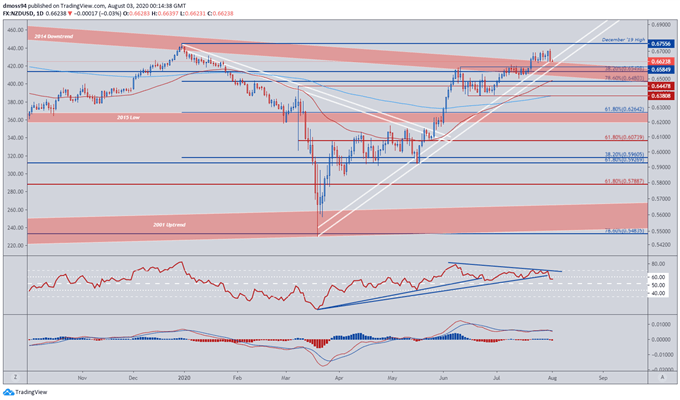