The Euro has weakened against the Pound Sterling after a worse than expected GDP growth rate figure of -11.7%, year on year (YoY). Analysts were already anticipating a dire figure of -11.3% however, the disappointment seemed to provide the spark for the recent lower move.

Understandably, considerable interest was focused on the quarter on quarter (QoQ) data as lockdown restrictions were applied during Q2 (April – Jun), which came in at -10.1 against an expected -9.0%, for yet another worse than expected result

Taking a look at the daily chart, price had failed to push above the resistance zone (yellow rectangle) and has made a move back to trendline support much like in our previous update. Buyers were previously able to overpower bears (blue circle) as price rebounded off an area of confluence where the upward sloping trendline intersects the 0.9000 psychological level. 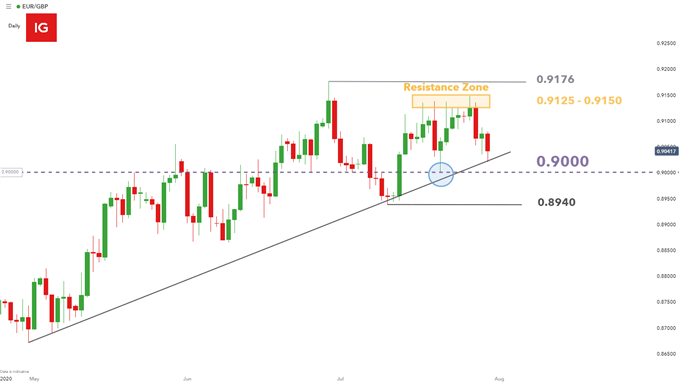 Taking a look at the 4 hour chart, it is clear to see the strong move lower after the data miss. Bulls will likely be looking for another bounce off trendline support and a move towards the 0.9086 level. Any further bullish momentum would bring into play the resistance zone of 0.9125 – 0.9148 before challenging the July high at 0.9176.

When viewing this recent move through a bearish lens, a break and close below trendline support would be needed in order to look for a further drop to the 0.9000 psych level. The July low of 0.8940 would be the next key level should bearish momentum persist. There remain a number of headwinds for lower prices considering the uptrend is still intact and is supported by the trendline and 0.9000 psych level. 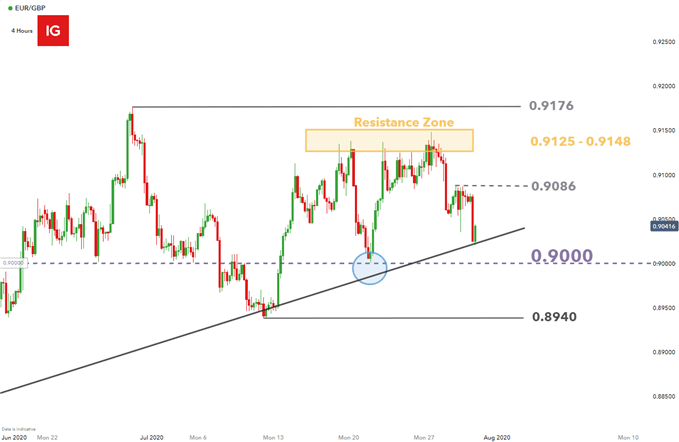 Moving from the daily chart to the shorter 4 hour chart is a technique called multiple time frame analysis and can be used to acquire a more granular view of the market.