As expected, the Federal Reserve’s Federal Open Market Committee kept rates unchanged Wednesday afternoon at 0-0.25%. The Dow Jones Index was unaffected as the announcement crossed the wires, with the index continuing in positive territory following some brief whiplash, currently higher by 0.29%. With no major policy shifts announced this afternoon, the accommodative stance is still the status quo, as expected. 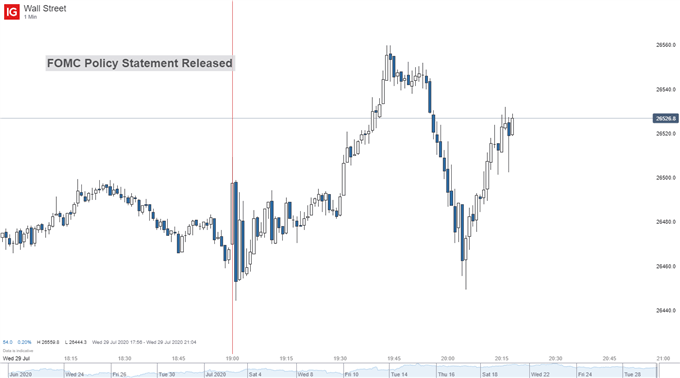 With the Fed already in an aggressive stance following its actions surrounding the COVID-19 pandemic and today’s reinforcement of that stance, upward pressure may continue in the short-term for US equity markets. Indeed, a major boost to markets remains the Fed’s quantitative easing actions through its balance sheet, now hovering just under 7 trillion in total. Regarding the ongoing COVID-19 pandemic, the Fed stated "The path of the economy will depend significantly on the course of the virus." 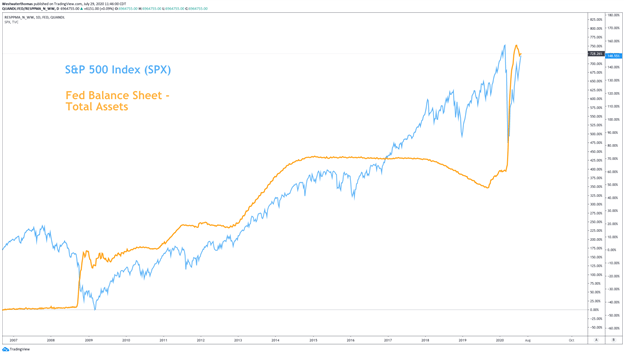 Adding to the Fed’s “whatever it takes” stance to support the economy was an announcement extending the lending facilities put in place earlier this year, designed to support the flow of credit throughout the economy. In an implementation note, US Dollar swap lines are also being extended. The US Dollar went back and forth during Powell's press conference, setting fresh intraday lows of 93.22, before spiking higher, and finally back to the 93.34 level, mostly unchanged from before the FOMC statement. In line with the risk-on sentiment injected into markets this afternoon, the Nasdaq index led the pack for US equity indexes, rising nearly 1.50% in afternoon trading.

NDX and US Dollar (5-Min Chart) 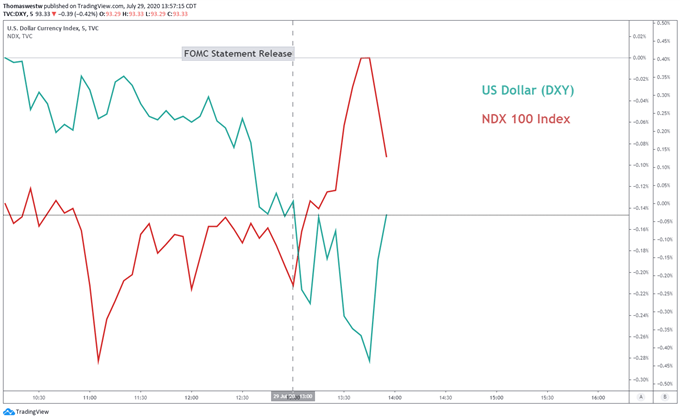 Speaking following the policy statement release, Mr. Powell noted that weaker demand in travel and hospitality has suppressed inflation, which is now running well below target. Overall, the Fed Chair struck a cautious tone when speaking about the state of the economy, saying "a full recovery is unlikely until people are confident that it's safe to engage in a broad range of activities" and "the path forward will also depend on policy actions taken at all levels of government to provide relief and support the economy as long as needed." As noted previously, the path of the economy remains highly dependent on the path of COVID-19.

Questions following Mr. Powell's statement surrounded funding facilities, the economic outlook, further policy actions, and overall market health. When asked about lending facilities, the Fed Chair said "it's important that the facilities stay in place," following a question about the lack of use in some of those facilities. Further referring to those facilities, they were referred to as "effectively unlimited." And Mr. Powell said "we feel like we have the ability to do more," after being asked about what the Federal Reserve can do further to support the economy with interest rates already so low. Although, the necessary impact of fiscal policy was also highlighted as being necessary to support economic policy as a whole.