Bitcoin Forecast: BTC Price Breaking Out as US Dollar Crumbles

BTC prices have ripped higher over the last few trading sessions. Popular cryptocurrencies – such as Bitcoin, Ethereum, Ripple, and Litecoin – are soaring with the US Dollar pacing a big drop for July. Bitcoin performance appears to have benefited from mounting demand for traditional anti-fiat assets like gold and silver. This largely stems from a staggering rise in the global money supply due to the coordinated policy response from governments and central banks, which flooded the financial system with cash.

An increase in the supply of money causes its value, or price, to decline assuming all other variables are held constant. That said, it is of little surprise that non-traditional currencies with limited or fixed supplies, including bitcoin and gold among other anti-fiat assets, have climbed considerably over recent months. 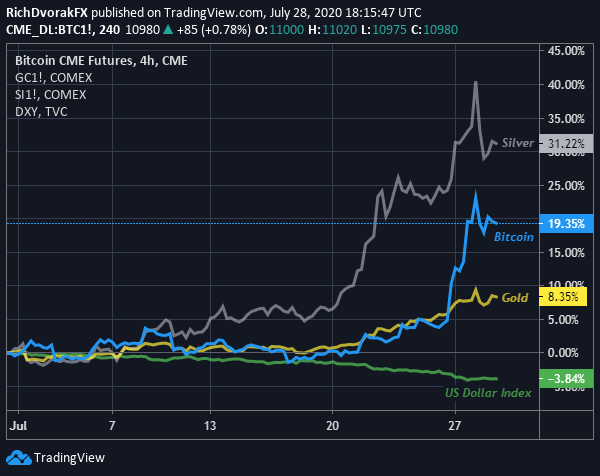 While the US Dollar implodes, and the direction of precious metals goes parabolic with gold and silver trading higher by 28% and 35% respectively year-to-date, less-loved Bitcoin has begun to reel in market attention and play catch up to its anti-fiat peers. The recent resurgence of Bitcoin and other cryptocurrencies has catapulted BTC price action higher by more than 20% since I highlighted potential for a topside pennant breakout on June 16. 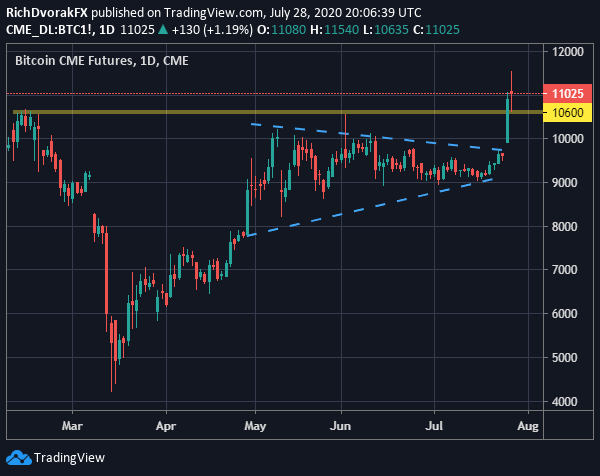 Bitcoin priced in USD currently fluctuates around $11,000 and follows the explosion above its pennant pattern resistance line formed by a string of lower highs since May. That constructive technical setup, which was also underpinned by a Bollinger Band squeeze, helped provide BTC/USD price action with a big enough boost for the cryptocurrency to surmount its prior 2020 swing high near the $10,600-level.

Looking ahead, Bitcoin could continue its steep climb fueled on the back of its bullish anti-fiat narrative. Conversely, an aggressive rebound attempt staged by the US Dollar, which is underscored by FOMC correction potential in the wake of a scheduled Fed meeting announcement this Wednesday, might strongarm Bitcoin back lower.