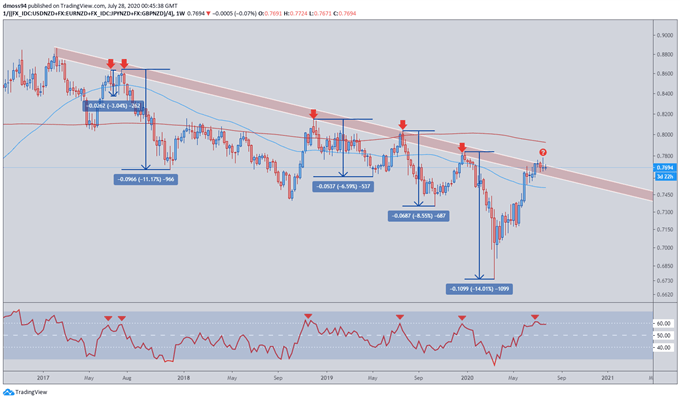 The New Zealand Dollar’s 15.5% surge from the March low (0.6740) could be coming to an end, as price struggles to break above the 2017 downtrend and the RSI fails to climb above 60 into bullish territory.

With the development of price and the RSI eerily similar to the five previous occasions NZD tested key resistance, a significant pull-back looks to be on the cards.

However, price has remained relatively resilient over the last 4 weeks, camping within range resistance as a series of weekly Doji candles hint at indecisiveness in the future direction of the trade-sensitive currency. 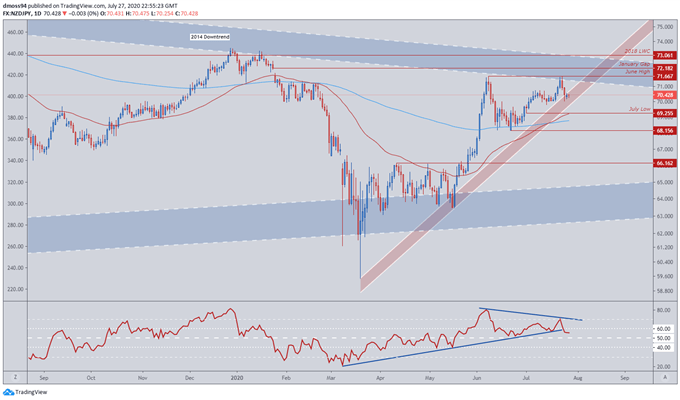 The NZD/JPY exchange rate may extend its declines after carving out a potential Double Top reversal pattern at the June high (71.67).

Although a close below uptrend support and the psychologically imposing 70 level is needed to validate the bearish reversal pattern, the distinct divergence between price and the RSI suggests that bullish impetus may be fading.

With that in mind, a break and close below 4-month trend support could signal the resumption of the 6-year downtrend extending from the 2014 high (94.05), possibly opening up a path for price to test sentiment defining support at the 200-day moving average (68.78).

On the other hand, with the uptrend from the yearly low (59.49) still intact price could continue to trek higher as the 50-DMA (69.23) crosses over its ‘slower’ 200-period counterpart (68.78), potentially intensifying buying pressure and resulting in a retest of the monthly high (71.67). 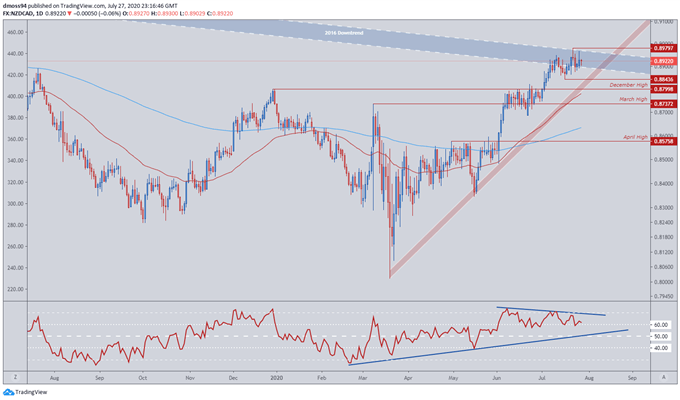 Similar to its NZD/JPY counterpart, the NZD/CAD exchange rate is struggling to break above long-term trend resistance as the RSI fails to follow price to higher highs.

However, price remains constructively perched above psychological support at the 0.89 level, signaling a potential retest of the yearly high (0.8979) could be in the offing.

A daily close above the 2016 downtrend and July high (0.8979) is needed to validate bullish potential, and potentially carve a path to resistance at the 0.91 level.

Conversely, failure to break to fresh yearly highs may invigorate sellers and poossibly fuel a correction back to 4-month trend support and the July 15 low (0.8844). 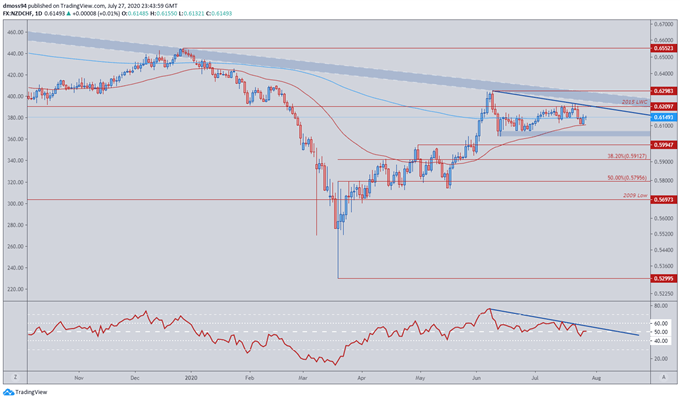 The NZD/CHF exchange rate may be carving out a Descending Triangle pattern at key resistance, as price consolidates between resistance at the 2015 low weekly close (0.6210) and support at the June 12 low (0.6041).

The path of least resistance seems to be to the downside, as the RSI tracks its constructive downtrend and dives back below its neutral midpoint.