While the reopening of the economy has provided some relief for bulls in the FTSE 100 index, buyers don’t appear to be quite as confident as those in the Dow, S&P 500 and other major indices. Despite a strong reversal from the March 2020 lows, Fibonacci levels continue to guide support and resistance levels which has helped to cap the four-month advance , despite the significant momentum that was previously driving the move. 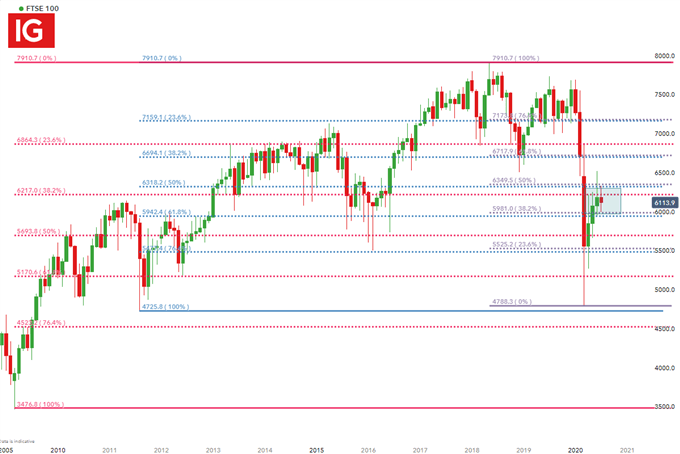 MACD Remains Below the Zero Line

From a technical perspective, current price action has seen momentum shift from the strength on full display in late-March through May. In June, FTSE price action ran into a confluent spot of long-term resistance and since, buyers have been thwarted and new highs have had to remain on wait. Correspondingly, a range has formed as shown on the four-hour chart below.

Meanwhile, the Moving Average Convergence/Divergence (MACD) indicator, which helps to measure both the momentum and the direction of the trend, suggests that the while prices remain below the zero line, suggesting that the FTSE may be oversold, bulls may begin to exert pressure, as indicated by the MACD crossover. 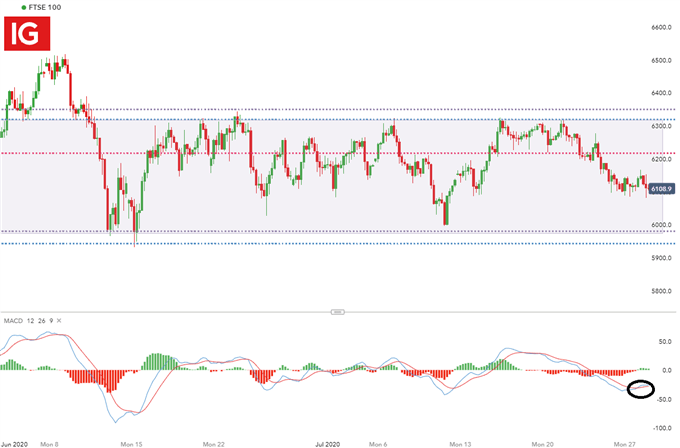 The bullish move that spanned from the March lows into May ran into a batch of resistance levels that have since held buyers at bay. Since that longer-term resistance has come into play and since the range looked at above has continued to build, the potential for a break, in one direction or the other, has appeared to align with ongoing fears surrounding the coronavirus pandemic, Brexit negotiations and, more recently, growing tensions between the UK and China. The fact that mean reversion has built-in highlights the acrimony around current events; but the potential for a bearish move cannot be ruled out, given that sellers continue to retaliate, apparently determined to push prices to support.

Contrary to this, a break below the psychological level of 6100 and further, below 5981, the 38.2% retracement of the short-term move, may result in deeper downward pressure, with 5942.4, the 61.8% Fibonacci level of the secondary move, coming in as potentially deeper support.

What do Retail Traders Think?

IGCS shows that, at the time of writing, 70% of retail traders are holding long positions in the FTSE 100. We typically take a contrarian view to crowd sentiment, and the fact traders are net-long suggests that prices may continue to fall.