Major US stock indices retraced on Friday amid a broad ‘risk off’ move. This came against the backdrop of rising US-China geopolitical tensions over the closure of each other’s consulates in Houston and Chengdu. A military standoff in the South China Sea has further dampened risk appetite, and sent gold prices to a nine-year high of US$ 1,900.

Second-quarter corporate earnings have largely beaten market expectation, which helped to underpin the stock market rally. This week, around 31% of S&P 500 component companies will release results, including General Electric, Boeing, Qualcomm, PayPal, Facebook, General Motors, Procter & Gamble, Apple, Amazon, Alphabet, Ford, Exxon Mobil and Chevron. Corporate America may continue to deliver more positive surprises, but this might also mean that there will be lack of support after the earnings seasonpeak. This renders the stock market susceptible to a pullback when we enter into the month of August.

There are also a couple of high risk events this week, including the Fed meeting as well as second-quarter GDP data from the US and Germany. 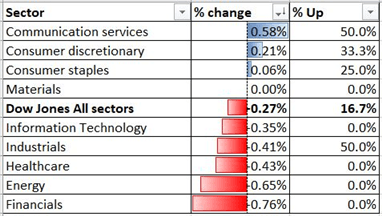 Technically, the Dow Jones has fallen to a key support level at 26,400, which is the lower bound of an ‘ascending channel’ formed since late March (chart below). Breaking below this level could lead to further downside towards its 50-Day Simple Moving Average (SMA) at 26,100.

The Hang Seng Index (HSI) stock market benchmark broke a key 25,000 support on Friday, and thus probably opened room for more downside in the near term. HSI futures are trading at around 24,800 this morning, below its 50-Day SMA line. Immediate support could be found at

Gold prices surged to a nine-year high at US$ 1,913 on Monday, propelled by rising demand for safety as the US-China relationship deteriorates. The situation in the South China Sea is carefully watched by traders, who may eye gold, Japanese Yen, and Treasuries as safe-havens and hedging tools against equity market risks.

Technically, gold is riding an ascending trend towards its all-time high seen in Sep 2011. However, as the price went up quite quickly, it may also face a technical correction on its way to higher highs.